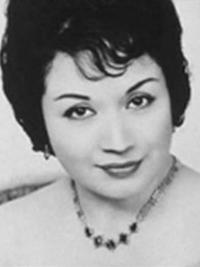 Oralia Dominguez was born in San Luis Potosi, Mexico in 1925 and made her operatic debut in in a small role in Puccini’s Manon Lescaut in 1945. In 1950 she sang Amneris opposite the Aida of Maria Callas in Mexico City, and by the mid-1950s was a firm favourite in the UK following a sensational debut at the Wigmore Hall; in 1955 she created the role of Madame Sosostris in Tippett’s The Midsummer Marriage at Covent Garden.

Though Dominguez was primarily associated with heavyweight roles such as Amneris, Preziosilla, Ulrica, Azucena, and the Principessa in Adriana Lecouvreur, she was also a fine comedienne (Mistress Quickly in Falstaff was one of her signature-roles, and is preserved on record in a live recording from Glyndebourne) and made successful forays in earlier repertoire including Vivaldi’s Juditha Triumphans and Arnalta in Monteverdi’s L’incoronazione di Poppea, which she sang at Glyndebourne in the 1960s. Her discography also includes Erda on Herbert von Karajan’s Ring Cycle, Verdi Requiems under Ferenc Fricsay, Georg Solti, Victor de Sabata and Karajan, and the Bach Magnificat opposite Elisabeth Schwarzkopf and Nicolai Gedda.

Dominguez gave her final performance (in the Verdi Requiem) in 1982; she retired to Milan, the scene of many of her operatic triumphs, and died aged 88.

Find out more at https://en.wikipedia.org/wiki/Oralia_Domínguez