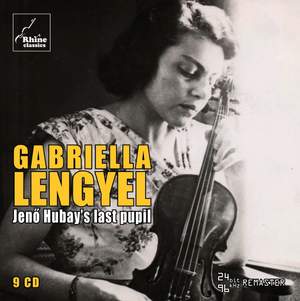 Purcell: Suite from the Fairy Queen

Farkas: Sonatina No.2 for Violin and Piano

Zsolt: Satyr and Dryads - Fairy Tale for Violin and Piano

Farkas: Sonatina No.2 for Violin and Piano

Arma: Divertimento de Concert No.1 for Violin and Piano

Violinist Gabriella Lengyel (b. 1948) is the last pupil of the great Hungarian violinist and pedagogue Jeno Hubay. This 9CD box set comprises never before released recordings of performances of a huge variety of works. Musical talent since her early youth. At age 5 she began her musical training at the Franz Liszt Academy of Music in Budapest with Nandor [Ferdinand] Zsolt. At 15 she concluded there all courses with distinction and obtained the violin Diploma, continuing later her studies with Jen? [Eugen] Hubay and Ede [Edouard] Zathureczky. She reached her first international success at the 1937 Violin Competition in Vienna, followed by concerts in Austria, Italy, France, Holland, the Baltic States and Yugoslavia; however, she could not satisfy the repeated invitations from these countries, and also Portugal and Spain, because of the declarations of war. During her career, she played as a soloist with the London Philharmonic, the Stuttgart Chamber Orchestra, the Hague Symphony, under Ernest Ansermet, Ferenc Fricsay, Eduard van Beinum, Victor Desarzens, Eugen Jochum, Andre Girard, Constantin Silvestri, Georg Solti, George Enescu, Pablo Casals, Willem Mengelberg, Karl Munchinger and Bernhard Paumgartner.