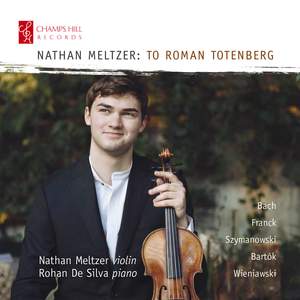 Rising star violinist Nathan Meltzer releases his debut recording: an homage to Roman Totenberg recorded on the famous ‘Ames, Totenberg’ Stradivarius violin (1734). The Ames Totenberg violin was famously stolen from Professor Totenberg in 1980 and recovered by the FBI some 35 years later from a California basement. Totenberg’s daughters arranged for the instrument to be restored and sold to an anonymous buyer. Meltzer became its proud custodian in October 2018, beginning a new chapter in its history. For his debut album, made together with pianist Rohan De Silva, Meltzer has recorded a selection of Professor Totenberg's favourite pieces, including the Wieniawski Polonaise and Szymanowski Arethusa, which Totenberg performed for President Roosevelts at a White House recital in 1936.