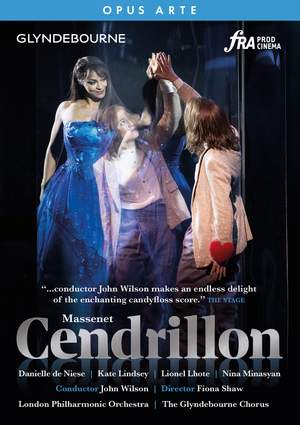 With its combination of enchanting love story and broad, burlesque comedy, Cendrillon is one of the great operatic fairy tales – a Cinderella that looks back to Charles Perrault’s original story in all its richness and ambiguity. Massenet’s sensuous Belle Epoque fairy tale is gilded with lavish orchestral textures and glittering vocal writing, drawing on everything from baroque dances to Wagner-inspired chromaticism to bring its story to colourful life, conjuring a world of infinite musical and emotional variety. Fiona Shaw’s original Tour production makes its Festival debut here, re-directed by Fiona Dunn and conducted by John Wilson, with a cast led by Glyndebourne favourites Danielle de Niese as Cendrillon and Kate Lindsey as her Prince.

Lindsey's dusky mezzo is the perfect foil to de Niese’s brighter sound, particularly crucial in the glorious love-duets...The other knock-out performance comes from Armenian soprano Nina Minasyan, whose ravishingly sung, unusually sassy Fairy Godmother all but steals the show...In the pit, John Wilson works miracles too, keeping a score which can easily seem stodgy and overblown light on its feet without ever short-changing or apologising for the music’s heart-on-sleeve sentimentality.