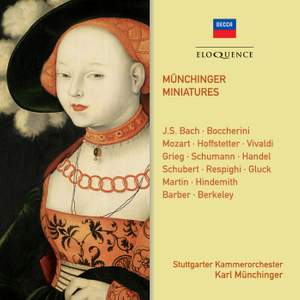 Karl Munchinger (1915-1990) was remembered for decades as a solid conductor of Baroque music, but previous reissues on Eloquence have served to broaden our view of a consummate musician. Recent issues of Haydn and Mozart (4840170) and Liszt and Wagner (4828427) demonstrate that he also had the Classical and Romantic repertoire at his fingertips.

Here is the complement to those issues, an invaluable continuation of the Munchinger story: a genial disc of encore-like gems from Bach to Grieg, recorded by Decca in September 1966 and first issued the following summer. It includes the conductor’s own, straightforward but sensitive orchestrations of two Bach fugues and a movement from Schumann’s Op.66 piano cycle, Bilder aus Osten. Alongside them are Baroque classics for which the Stuttgart Chamber Orchestra was famed, such as the ‘Air on a G string’, two movements from Vivaldi’s ‘Alla Rustica’ Concerto and the Musette from Handel’s G minor Concerto grosso Op.6.

On CD2, ‘Contemporary Music for String Orchestra’ ventures beyond the well-trodden path of Barber’s Adagio to include a set of Hindemith’s pedagogical music, a delicately refined Serenade by Lennox Berkeley, and Frank Martin’s arrangement of his own organ Passacaille. Dating from October 1950, the album was recorded in Decca’s crystal-clear mono sound, as were two bonus items on this new compilation: the sombre, graceful Chaconne from Gluck’s Paride ed Elena, in 1960, and from a decade earlier, the Third Suite of Respighi’s Ancient Airs and Dances, with its haunting Siciliano and imposing final Passacaglia.

‘[The Barber] gets a very fine performance. So do all the works on this very well recorded and thoroughly recommended disc.’ Gramophone, August 1957 (‘Contemporary Music for String Orchestra’)

‘This is the most delightful record of its kind that I have heard for a long time. Beautiful and well contrasted music, supremely well played and recorded with a string tone that combines a keen edge and richness... This record cannot be recommended too strongly to those looking for an unhackneyed selection of short pieces.’ Gramophone, July 1967 (‘Munchinger Miniatures’)