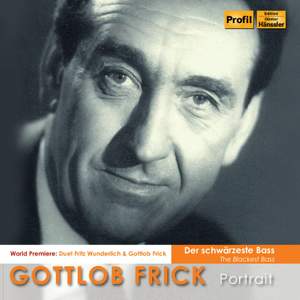 The voice itself was world-class in range, volume and technical proficiency, with an instantly recognizable timbre that could be warmed or chilled at will (and was only ‘black’ when character... — Opera, December 2019 More…

It was the conductor Wilhelm Furtwangler who first gave Gottlob Frick the nickname 'Der schwarz­este Bass'. This accolade has been picked up time and again, gone through various manifestations, and became a sort of trademark of the German bass Gottlob Frick. That said, the attribute 'black' is often applied to define the vocal range of a basso profundo's ability to produce sonorous deep notes. However, the definition of 'black bass' means far more than that: it applies primarily to the deep, dark timbre, the rich and sonorous sound and the lasting flexibility of the voice even in the deep registers, paired with strength, momentum, natural resonance and abundant expression in the entire vocal range.

The voice itself was world-class in range, volume and technical proficiency, with an instantly recognizable timbre that could be warmed or chilled at will (and was only ‘black’ when character and situation required it), a sure sense of legato and impressive flexibility: we can relish here the earthy panache with which he delivers the wide intervals of Mozart’s Osmin and the tongue-twisting patter of Rossini’s Bartolo.