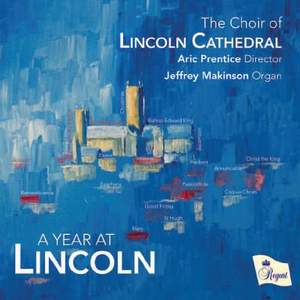 Offer, A Year at Lincoln Cathedral

Wesley, S S: Wash me throughly from my wickedness

The latest addition to the Regent ‘A year at...’ series marks our first recording with the superb, and under-recorded Choir of Lincoln Cathedral, directed by Aric Prentice.

In this beautiful collection of choral music from the 16th to 21st centuries we are taken on a musical journey through a typical church year at Lincoln Cathedral beginning with Advent and ending with a celebration of the work of George Herbert – a Prebendary of the Cathedral – in Ralph Vaughan Williams’s glorious setting of his words Let all the world.

The programme includes the first recording of a 2010 commission by Lincoln Cathedral of My dearest wish from Lincolnshire composer, and Classic FM’s Composer in Residence 2006–7, Patrick Hawes.

There has been a choir of men and boys at Lincoln for more than six hundred years, who have in more recent years been augmented by a line of girl choristers and on occasion female choral scholars. The twenty boys and twenty girls who make up the two top lines of the choir attend more than ten different local schools. They rehearse each morning during the week before school and sing eight times each week, shared between each of the two sections. They receive vocal, instrumental and theory training from the cathedral as well as significant support with their transport arrangements to and from school. The alto, tenor and bass parts are taken by the six Lay Vicars and five annually-appointed Choral Scholars. Former choral scholars have gone on to sing in more than fifteen other cathedral choirs, to the Royal Academy and Royal College of Music and into Genesis and The Sixteen.

In addition to more than 270 sung services each year as part of the opus dei, the choir gives regular concerts in the cathedral and around the region.