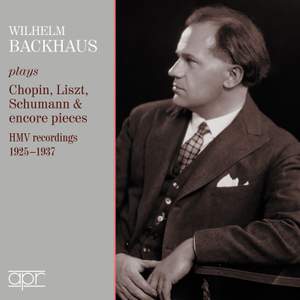 Wilhelm Backhaus (1884–1969) left a 60-year recorded legacy which began in 1908, but the champion of Beethoven and Brahms we know from his later years performed a much wider repertoire before the war. This set focuses on this more ‘romantic’ repertoire – his Chopin études from 1928 were the first complete recorded cycle and still astonish with their virtuosity. His Schumann Fantasy is another landmark recording, the 78rpm era benchmark, and what a delightful surprise it is to hear him in his own spectacular transcriptions or in works by Albéniz and Moszkowski.