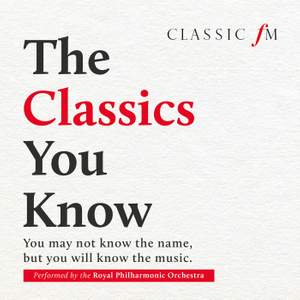 The Classics You Know

13. Dance Of The Knights

4. In The Hall Of The Mountain King

The Classics You Know is a brand-new collection of recordings performed by the Royal Philharmonic Orchestra. Whether you are a fan of classical music or not, we guarantee that when you hear this music you will not be able to stop yourself from humming along!

Every track on the album is a classical hit, written by the world’s greatest composers, including Beethoven, Bach, Tchaikovsky and many more. Furthermore, each track is well recognised through popular culture - on film, adverts, television and more.

You may not know the official names of these pieces and like many, you may refer to them as...

1: Romeo and Juliet - Dance of the Knights (Prokofiev)

11: Flower Duet from (from the opera Lakmé)(Delibes)