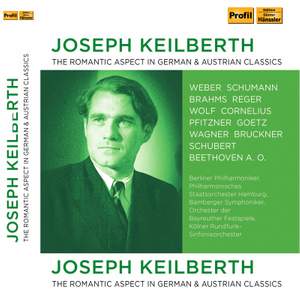 Reger: Variations and Fugue on a theme of Johann Adam Hiller Op. 100

I. Awakening of Cheerful Feelings upon Arrival in the Country. Allegro ma non troppo

Prelude to Act I. Ruhig

Die Walküre, WWV 86B: Ride of the Valkyries (Live)

Joseph Keilberth (1908–1968) belongs to that generation of conductors who continued after Furtwängler’s death to hold the musical heritage of German and Austrian composers in particularly high regard. Furthermore, Keilberth exhibited a very special love for the works of Max Reger and Hans Pfitzner. It is to that predilection of his that we owe a number of outstanding recordings released here for the first time in this 10-CD box set.

Keilberth began his career at the age of seventeen in his native city of Karlsruhe as a rehearsal pianist at the municipal theatre, going on to be conductor and finally, in 1935, General Music Director there. In 1940 he assumed the direction of the German Philharmonic Orchestra in Prague. After 1945 he successfully applied himself in Dresden – under the most arduous of conditions – to renewing the great musical tradition of this war-ravaged city. He brought in Rudolf Kempe, who succeeded him in the position of overall musical director. Keilberth went to Hamburg in 1951 as head of the Hanseatic city’s Philharmonic State Orchestra, with which he remained closely associated for many years. It was at this time that he joined former members of his Prague orchestra in founding the Bamberger Symphoniker, remaining that orchestra’s principal conductor until his death. Joseph Keilberth died of a heart attack while conducting a performance of Tristan in Munich in 1968.