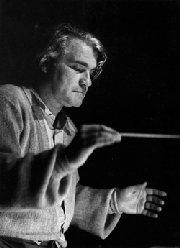 Joseph Keilberth (born April 19, 1908 in Karlsruhe, died July 20, 1968 in Munich) was a German conductor. He started his career in the Karlsruhe State Theatre. In 1940 he became director of the German Philharmonic Orchestra of Prague. Near the end of World War II he became principal conductor of the Dresden Staatskapelle. In 1949 he became chief conductor of the Bamberg Symphony Orchestra, formed mainly of Germans expelled from post-war Czechoslovakia under the Beneš decrees. He died after collapsing while conducting Wagner's opera Tristan und Isolde in exactly the same place as Felix Mottl had done in 1911.