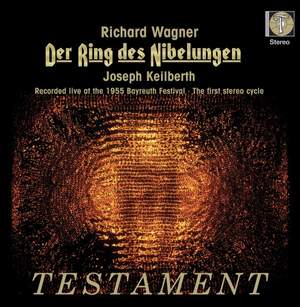 [Keilberth] is urgent and passionate, and the thrust of the performance makes the result intensely exciting, inspiring the great Wagnerian singers in the cast to give of their finest...here... — Penguin Guide, 2010, 3 out of 4 stars More…

Testament has released the first-ever stereo recording of The Ring Cycle with Hans Hotter, Astrid Varnay and Wolfgang Windgassen in this 14-CD boxed set at a special low price of 14 discs for the price of 9.

Thrillingly conducted by Joseph Keilberth (called by the late Astrid Varnay "a conductor with so much love, who was always there for you"), the cycle provides the opportunity to hear complete for the first time on commercial release the definitive performances of Hans Hotter (Wotan/Wanderer), Astrid Varnay (Brünnhilde), Ramon Vinay (Siegmund), Josef Greindl (Hagen) and Paul Kuen (Mime), in addition to the much-loved Siegfried of Wolfgang Windgassen, here heard in his prime.

These ‘live’ Bayreuth performances were taped by a Decca team led by Peter Andry and including the noted engineers Kenneth Wilkinson and Roy Wallace, with Gordon Parry as assistant. Using a new six channel mixer designed by Wallace, the team made both stereo and mono recordings of each opera. Three microphones were placed in the sunken orchestra pit and three hung from a lighting bridge about 20 feet above the stage. "This was brilliant; it worked beautifully", remembers Wallace. The company prepared for an expected release, but John Culshaw, recently returned to Decca, vetoed the project. He disliked ‘live’ recordings and already had plans for a studio Ring with Solti which began four years later. Decca’s recording vividly captures in wonderful stereo sound the unique acoustic and stage/pit balance of the Bayreuth Festival theatre with its sunken orchestra, in addition to preserving the leading singers from a Wagnerian golden age in ‘live’ performance.

The four individual operas have received rave reviews from the international press and this ‘Ring’ cycle is being hailed as ‘definitive’.

[Keilberth] is urgent and passionate, and the thrust of the performance makes the result intensely exciting, inspiring the great Wagnerian singers in the cast to give of their finest...here [Hotter] not only sings with urgency, his voice is in wonderfully fresh condition, perfectly focused...Varnay as Brünnhilde is similarly moving.

Recorded at Bayreuth in 1955, this triumphant cycle conducted by Joseph Keilberth now lays claim to be the first stereo Ring...There were two cycles at Bayreuth that year, and although some may prefer Martha Mödl's searing Brünnhilde from the second cycle (parts of which are also available on the Testament label), this first cycle features Astrid Varnay in a fearless, majestic performance, not least in the closing Immolation Scene.