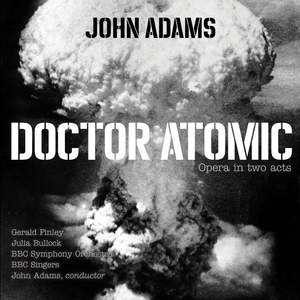 Finley ‘owns’ the characterisation of J Robert Oppenheimer…and Julia Bullock’s Kitty [is] the most ardent possible. All else is compelling on every level, with superb British support from Brindley... — BBC Music Magazine, August 2018, 5 out of 5 stars More…

"We surround the plutonium core"

"We are bedeviled by faulty detonators"

"Many of us are inclined to say"

"This is a petition"

"The test must go on as scheduled"

"No, before the bomb is used"

"The motive of it all was loneliness"

"What the hell is wrong with the weather?"

"With respect, sir, anyone with two good eyes"

"I have been preoccupied with many matters"

"Get them out of here. From now on, I'm making my own weather predictions"

"General, you are bearing up with remarkable fortitude"

"In the north the cloud-flower blossoms"

"To the farthest west, the sea and the striped country"

"A delay in the Potsdam Ultimatum"

"Edward, the test will be delayed an hour"

"This program has been plagued from the start"

"To keep the weakness secret"

"The winter dawned, but the dead did not come back"

"And love, which contains all human spirit"

"The only saviors are the ham sandwiches"

Chorus - "At the sight of this"

"The sky is clear to the east"

"In the midnight, in the flame-brilliant midnight"

‘His most visionary and ambitious stage work to date … Adams’s conducting, second to none in his own music, had tremendous conviction and unique authority, with every facet of the score’s terrible beauty laid bare … thrilling playing and choral singing … Gerald Finley conveyed Oppenheimer’s moral agony with singing of great refinement and subtlety.’ — Guardian

John Adams’ works, spanning more than four decades, have entered the repertoire and are among the most performed of all contemporary classical music, among them Harmonielehre, Shaker Loops, Chamber Symphony, Doctor Atomic Symphony, Short Ride in a Fast Machine, and his Violin Concerto. His stage works, all in collaboration with director Peter Sellars, include Nixon in China (1987), The Death of Klinghoffer (1991), El Niño (2000), Doctor Atomic (2005), A Flowering Tree (2006), and the Passion oratorio The Gospel According to the Other Mary (2012). In November 2017, Adams’s new operaGirls of the Golden West, set during the 1850s California Gold Rush, received its world premiere at San Francisco Opera. The opera’s libretto, assembled by Sellars, includes original Gold Rush song lyrics, letters, journal entries, and personal memoirs from the era. Doctor Atomic is Nonesuch’s thirty-first recording of the works on John Adams, beginning with Harmonielehre in 1986; the label has released forty-seven first recordings of Adams pieces.

Finley ‘owns’ the characterisation of J Robert Oppenheimer…and Julia Bullock’s Kitty [is] the most ardent possible. All else is compelling on every level, with superb British support from Brindley Sherratt as doubtful fellow physicist Edward Teller…Superbly recorded, the BBC Singers and Symphony Orchestra pull total focus under Adams’s ever more experienced baton, and the last half hour is stunning…Batter my heart indeed.

This recording combines studio sessions and a live BBC concert performance at the Barbican, making it grippingly vivid with the benefit of extended rehearsal and re-takes. Gerald Finley gives a towering performance as J. Robert Oppenheimer.

Finley is imperious once more as Oppenheimer…Bullock also produces an excellent, rounded performance as Kitty…But it is the BBC Symphony Orchestra and BBC Singers who really stand out here. Razor sharp from beginning to end, the orchestra remain highly responsive to the work’s often complex polyrhythmic patterns and pulsations, with tempo and pacing perfectly judged under the composer’s own direction.

All the soloists bravely hold their own in a score burdened by frequently ungrateful vocal writing…Finley’s Oppenheimer, a role that over the years he has made his own, is a performance of fluency, lyrical ability and warm, humane tone…The BBCSO is terrific, and Adams himself conducts with verve and precision.

The authority that [Finley] brings to the part is immediately apparent...There are many other outstanding contributions, not least from Brindley Sherratt as Oppenheimer's colleague, Edward Teller, and Jennifer Johnston as the Oppenheimers' maid, Pasqualita...Overall, though, this is Finley's opera, and his impressive achievement makes this a highly compelling first recording for this thought-provoking work.

The performance is so strong that any reservations about the quality of the opera are silenced. Especially vivid are the performances from Gerald Finley (who created “Oppie” in 2005), Julia Bullock as the “love interest” and the BBC Singers and Symphony Orchestra under the composer’s thrusting baton...A must-have for Adams devotees.

You can complain about Peter Sellars’s libretto, sliced out of documentary sources covering Robert Oppenheimer and his fellow nuclear weapon builders; about heaviness and grandiosity. Yet when Adams (also the conductor) fires on all cylinders, the results are darkly spectacular and sometimes very moving. Gerald Finley’s commitment as Oppenheimer is total, although everyone — orchestra, BBC Singers and all — give their very best.

This wonderful recording conducted by the composer must be considered definitive in all ways.Finley has made the title role his own since the San Francisco premiere in 2005 and he has a wonderful supporting cast here...Julia Bullock is ravishing as Kitty in her two big scenes...Truly, this is an opera with enormous relevance to our own age of anxiety.