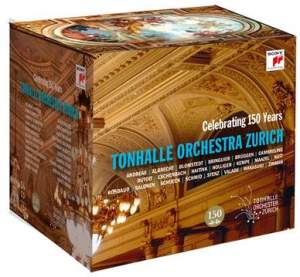 Show 12 remaining works on this recording

Hide 12 works on this recording

In the year 1865, a group of Zürich citizens founded the Orchesterverein as the city's first permanent orchestra. The founding of the Tonhalle-Orchester Zürich followed several years later, in 1868. Both ensembles continue to perform in Zürich today. In 2018, the orchestra can celebrate the 150th anniversary of its foundation.

The box presents all the orchestra’s principal conductors insofar as radio or other recordings of performances with them do exist.

All the material has never before been available on a recording medium. All recordings have been digitally remastered and represent the state of the art regarding digital audio restoration.