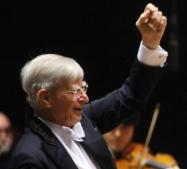 Born in Massachusetts to Swedish parents in 1927, Blomstedt received his musical education in Stockholm and Uppsala and studied with Igor Markevitch, Leonard Bernstein and Paul Sacher, with early successes including the 1953 Koussevitzky Conducting Prize and the Salzburg Conducting Competition two years later.

Blomstedt is best known for his interpretations of the German/Austrian Romantic and late-Classical symphonies, particularly those by Beethoven, Bruckner and Schubert, and has also made his mark on Scandinavian repertoire with acclaimed recordings of Nielsen and Sibelius. Following long-term engagements with several major Scandinavian orchestras, the San Francisco Symphony Orchestra, and the Leipzig Gewandhausorchester, Blomstedt now holds honorary positions in San Francisco, Bamberg, Copenhagen and Tokyo.

Find out more at https://en.wikipedia.org/wiki/Herbert_Blomstedt