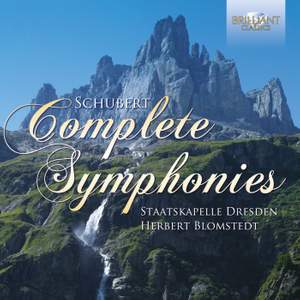 The playing of the Staatskapelle Dresden is quite excellent, with fine work from the strings and commendable clarity of wind textures. This may be “big-band” Schubert, but never once did I sense... — MusicWeb International, 14th April 2014 More…

Bringing together all seven of Schubert’s completed symphonies, as well as the much loved B minor ‘Unfinished’, this set charts the development of Schubert’s voice as a symphonist. His first six symphonies were composed between 1813 and 1818 for the orchestra at the religious school that he attended in Vienna. Although they could be considered to be apprentice works, and are clearly influenced by Haydn, Mozart, Beethoven, and – in the case of the Sixth Symphony – Rossini, they are remarkable achievements for such a young composer, and the listener can hear some of the hallmarks of Schubert’s more forwardlooking, romantic style, such as a bolder and richer harmonic language, beginning to emerge.

After a serious illness in 1822, from which he only partially recovered, Schubert composed his final symphonic masterpieces, the ‘Unfinished’ (1822) and the ‘Great’ (1825–6). From the haunting slow introduction and the extraordinary sense of pathos of the ‘Unfinished’ to the joyful and rhythmically vital ‘Great’ symphony, both works showcase Schubert the symphonist at the peak of his powers and are some of the most popular and enduring pieces in the orchestral canon.

Schubert’s complete symphonies are performed here by the legendary Staatskapelle Dresden under the inspired direction of celebrated conductor Herbert Blomstedt, praised by Gramophone for his ‘incomparably refined sensitivity and canny interpretative prowess’.

The playing of the Staatskapelle Dresden is quite excellent, with fine work from the strings and commendable clarity of wind textures. This may be “big-band” Schubert, but never once did I sense a heaviness to the ensemble that impaired my enjoyment.