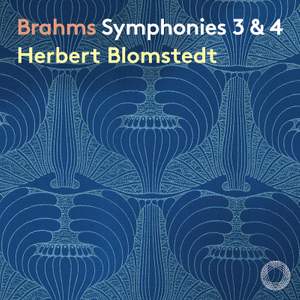 You won’t hear lovelier playing of Brahms’s music, nor clearer presentation of its ceaselessly inventive inner workings. What doesn’t come across as strongly is how these are two of the greatest... — BBC Music Magazine, July 2022, 4 out of 5 stars (Performance) / 5 out of 5 stars (Recording) More…

Maestro Herbert Blomstedt and the Gewandhausorchester Leipzig close their acclaimed PENTATONE Brahms cycle with the composer’s Third and Fourth Symphonies. Compared to the epic First and gloomily pastoral Second, Brahms’s Third Symphony is a glorious exploration of the chamber-musical possibilities of the symphony orchestra. While musical variation of elementary motifs already plays an import ant role in this work, Brahms shows his absolute mastery of that technique even more impressively in The Fourth. Blomstedt ’s keen eye for analytical detail never goes at the cost of the music’s emotional resonance, and the Gewandhausorchester plays these symphonies glowingly, demonstrating their extraordinary ensemble sound. Blomstedt’s work as a conductor is inseparably linked to his religious and human ethos, and his interpretations combine great faithfulness to the score and analytical precision with a soulfulness that awakens the music to pulsating life. In the more than sixty years of his career, he has acquired the unrestricted respect of the musical world. The Gewandhausorchester Leipzig is the oldest civic orchestra in the world with a glorious history, and is still count ed among the world’s leading ensembles. Their PENTATONE releases of Brahms’s First Symphony and Tragic Overture (2020), as well as his Second Symphony and Academic Festival Overture (2021), received rave reviews.

You won’t hear lovelier playing of Brahms’s music, nor clearer presentation of its ceaselessly inventive inner workings. What doesn’t come across as strongly is how these are two of the greatest symphonic masterworks ever to have been written down.