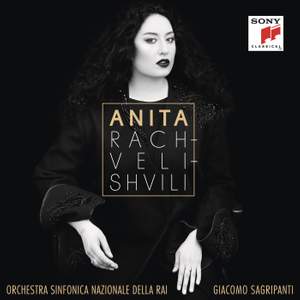 The voice itself has plenty of potential…It’s all there in the last track, Eboli’s ‘O don fatale’…Rachvelishvili tears into this great aria and has a proper dramatic instinct for where to change... — BBC Music Magazine, June 2018, 4 out of 5 stars More…

This is Anita Rachvelishvili’s debut album with Sony Classical. The Georgian mezzo-soprano rose to fame in 2009 when Daniel Barenboim selected the young singer to open the La Scala season and per-form the main role of Carmen alongside Jonas Kaufmann as Don José.

Since this time Anita has sung at prestigious venues including The Metropolitan Opera, the Deutsche Oper, the Bayerische Staatsoper, the Arena di Verona and London’s Royal Opera House: the 16/17 season included an appearance in Verdi’s Il Trovatore at the Covent Garden venue.

In the 17/18 season, Anita will appear alongside the London Symphony at the Menuhin Festival in Gstaad as Amneris from Aida.

Anita features some of the most popular and enduring opera arias in the mezzo-soprano repertoire; but also features a rare addition of The Cavatina of King Tamar, from Georgian composer Dmitry Arakishvili’s opera The Legend of Shota Rustaveli, demonstrating her Georgian heritage.

The voice itself has plenty of potential…It’s all there in the last track, Eboli’s ‘O don fatale’…Rachvelishvili tears into this great aria and has a proper dramatic instinct for where to change vocal and emotional gear…Here are hints of a fine Verdi mezzo-soprano ready for her prime.

Anita Rachvelishvili's voice is well-endowed with a quality that has long been rare among mezzos: a timbre rich in texture, free from harshness and even across a wide range. Both the Habanera and Seguidilla are indeed musically impeccable and vocally luxuriant without any hint of plumminess.

Since making her name in 2009 as Carmen at La Scala, aged just 25, Georgian mezzo Anita Rachvelishvili has been storming the world’s stages. Her debut CD offers some standard repertoire choices, but she blows the competition out of the water. People often bemoan that big voices are a thing of the past, but Rachvelishvili is here to prove them wrong, with her exciting and gleaming top notes and a baritonal chest register that rattles the speakers. She also displays great artistry and delicacy, never descending into exaggeration for the sake of cheap effect. This is a must-have CD for not just all lovers of great vocalism, but for anyone who relishes a singing actress in the first flush of her youthful triumph.