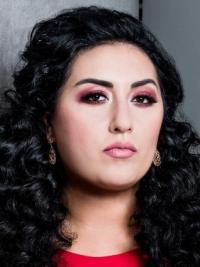 Born in Tbilisi in 1984, the Georgian mezzo Anita Rachvelishvili studied in her hometown and at the Accademia Teatro alla Scala, where she became a star virtually overnight at the age of 25 after Daniel Barenboim promoted her from Mercédès to the title-role in a new production of Carmen (opposite Jonas Kaufmann) in December 2009. She went on to sing the role at Covent Garden, the Bayerische Staatsoper, the Opera Bastille, the Deutsche Oper Berlin and the Metropolitan Opera, and has also had widespread international success in roles including Verdi’s Amneris and Azucena, Saint-Saens’s Dalila, Marfa in Khovanshchina and Lyubasha in The Tsar’s Bride.

In 2017 she signed to Sony Classical, and her debut album of opera arias (released early the following year) won a Schallplattenkritik Jahrespreis; her singing was described as ‘musically impeccable and vocally luxuriant’ by Opera Magazine, whilst Opera Now praised her ‘exciting and gleaming top notes and baritonal chest register’ as well as her ‘great artistry and delicacy’. Her discography also includes the title-role in Gluck’s Orfeo in a staging by La Fura dels Baus, The Tsar’s Bride from Berlin with Daniel Barenboim, and Azucena in Il trovatore from Covent Garden, all on DVD.

Find out more at https://en.wikipedia.org/wiki/Anita_Rachvelishvili