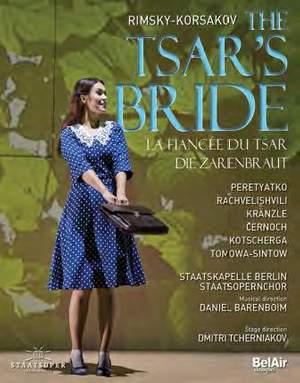 The argument is based on an historical case. In the suburbs of Moscow, reigned around 1571 Tsar Ivan IV, 'the Terrible'. Widowed, he is looking for a new wife for the third time. He chooses the young Marfa; she loves another man but bends to the will of the Tsar and renounces her love. From this starting plot, the Russian director Dmitri Tcherniakov retains only the frame. A live competition is organised for a virtual monarch like in a reality show called «Joe Millionaire » where competitors attempt to marry a rich man. Here, the characters become the various players of the audiovisual industry bringing an acerbic criticism of contemporary TV.

A revolving set and video wizardry, including dappled sunlight outside Marfa's home, keep the action flowing smoothly, in pin-sharp picture quality…Olga Peretyatko is an adorable Marfa, her bright timbre and easily floated top notes making her the picture of teenage innocence…Barenboim conducts a weighty account of Rimsky's score, played by the plush sounding Staatskapelle Berlin.

As Gryaznoy, the genius producer of the (false) media events we see created, Johannes Martin Kränzle offers an intense, closely observed performance, his baritone suitably macho and strong. Not quite idiomatic in pronunciation, he nonetheless shades the text subtly...the volcanic Anita Rachvelishvili offers the finest singing and most detailed work I’ve experienced from her.

Depressing for all the right reasons … Daniel Barenboim offers a smooth reading of the score, and the cast is outstanding … making the greatest impression is Anita Rachvelishvili’s stunning Lyubasha, a temperamental powerhouse whether crooning into a glass or booming an imprecation.