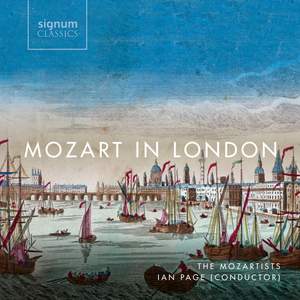 Act I: “O torment great, too great to bear”

Act I, Scene 2: "Amid a thousand racking Woes"

Excerpt,  Arnold, S: The Maid of the Mill

Act III, Scene 1: "To speak my mind of womankind"

"In this I fear my latest breath"

The conductor talks to Katherine about his new recording exploring the music which the young composer is likely to have encountered on his visit to the city in the mid-1760s.

This 2-CD set presents an unprecedented survey of Mozart’s childhood visit to London in 1764-65. Ian Page conducts his outstanding period-instrument orchestra in a fascinating and wide-ranging programme which includes Mozart’s remarkable first symphony (composed when he was eight years old), along with his two other London symphonies and his first concert aria. The repertoire also explores the music that was being performed in London during Mozart’s stay, including works by J. C. Bach, Thomas Arne, Abel, Pescetti, Perez, George Rush and William Bates, many of which have not previously been recorded, and the large cast of soloists includes eight singers and harpsichordist Steven Devine.

Bold yet highly sensitive, Page and his musicians show what makes this musicians show what makes this music great. Page draws on a deep bench of vocal talent; of his eight soloists, Rebecca Bottone and Robert Murray stand out stand out especially for the ability, so prized in Mozart’s London, of getting across a dramatic character in just one air. Page’s band, The Mozartists, make the colours and expressiveness leap off the page.

There are excellent performances of some of the fledgling Mozart’s London pieces interspersed among an abundance of rarely investigated repertory that was researched and edited especially for the occasion...Page’s knack for choosing interesting singers yields contributions from eight highly capable soloists...Nevertheless, the star of the show is the superb orchestra, which never sounds in the least bit perfunctory or formulaic.

This imaginative survey of the music which the young Mozart is likely to have encountered on his year-long visit to London is a real box of delights. Robert Murray and Rebecca Bottone are particularly engaging in the buffo excerpts from Arnold’s The Maid of the Mill and Arne’s The Guardian Outwitted, and Helen Sherman impresses in the perilous coloratura of ‘Amid a thousand racking woes’ from the latter’s Artaxerxes.

An ambitious and fascinating two-disc collection...here’s some striking music by the Neapolitan Davide Perez, and some cheerful songs by Egidio Duni and Samuel Arnold, all enterprisingly performed by the Mozartists under Ian Page.

One of its constant pleasures is the young British performers’ sheer gusto. Ian Page’s musicians, the Mozartists, bounce along on their period instruments with an alert attack, succulent tones (woodwinds especially) and no signs of panting or strain. Ana Maria Labin, Helen Sherman, Rebecca Bottone and other singers take spine-tingling leaps into the stratosphere and always come up smiling.