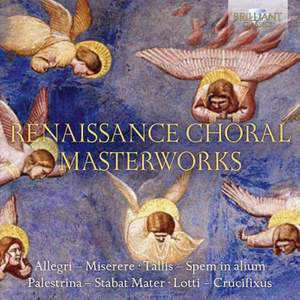 Gabrieli, A: In nobil sangue / Amor s'e in lei

The Renaissance era of the 16th and 17th centuries encompasses some of the most magnificent choral music ever written, at a time when composers were attached to royal chapels and cathedrals, and dedicated their art to the service of God, to creating musical masterworks that would complement and reflect the glory of the architecture which contained them.

This album contains some of the most enduring masterpieces from that era. It opens with the haunting strains of the Miserere which Allegri wrote for the Lenten liturgies of St Peter’s Basilica in Rome: the austere, haunting harmonies quickly became so renowned that the basilica moved to protect the work’s uniqueness by withholding the score and allowing performances only by its own choir.

There follows the Renaissance blockbuster Spem in alium, which Thomas Tallis created in 40 separate parts, to rival the grand but more static conception of an Italian contemporary. The courts of Spain and the Netherlands are also represented, with the lamenting O vos omnes by Victoria and Absalon fili mii by Josquin. The performances are compiled from albums by some of the world’s most renowned choirs for this repertoire, mostly based in the English centre of choral excellence, the chapels of Cambridge.

However, the music is largely Italian in origin, as one might expect: the melancholy strains of Palestrina’s Stabat mater and Lotti’s magical, eight-part Crucifixus are answered by more joyful and exuberant pieces by Monteverdi and Gabrieli, conceived for the Basilica of St Mark’s in Venice. This is a unique collection on record, enhanced by a lively introduction in the booklet to each work and composer on the album.