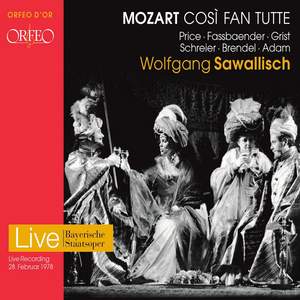 Act I: In uomini, in soldati (Live)

Even in its opera-buffa manifestation, the utterly disastrous wife-swapping experiment in Così fan tutte so scandalized the entire 19th century, from Beethoven to Wagner, that desperate attempts were constantly made to conceal the work’s frivolity under any number of respectable rewrites. It was Hermann Levi and Richard Strauss who recreated the original work for Munich with through-composed recitatives instead of spoken dialogues. Amazingly, it took this Munich production of the 1970s to bring Mozart’s absolute masterpiece to life in its original language; yet anything else - from a great master of musically subtle, rapid-reaction word-play – is sheer sacrilege! In any case, the acoustic account captures an almost unbearably intense moment in the history of music theatre. The music director of those days, true to local tradition and to his own history, once again shows himself to be not only a consummate Wagner and Strauss conductor but also, as in the previously released “Don Giovanni” from that era (ORFEO C846153), a hugely skilled interpreter of Mozart. The piece’s ensemble qualities, lifting it from the chasms of deep disgrace to a pinnacle of Mozart’s operatic writing, are brought out with breathtaking drama and vivid versatility, due not least to the cumulatively sensational qualities of the various protagonists. These were so highly regarded by the maestro himself as to justify a transfer from the customary Cuvilliés-Theater – where the first Munich production had been staged in 1795 – to the Nationaltheater itself: 'With soloists such as these, we can sell out the house'. Live Recording Bavarian State Opera February 28, 1978.

The cast is stellar. Margaret Price's studio Cosi, made seven years earlier, finds her in wonderful form but greatly handicapped by Klemperer's marmoreal tempos. Here, however, she sounds interpretatively freer and she makes consistently glorious sounds in her middle and upper registers. Some arias win applause, and one hears intermittent laughter, particularly when Reri Grist is working the stage. Not a 'first' Cosi certainly, but especially for Price fans - well worth hearing.

Peter Schreier and Wolfgang Brendel radiate charm and confidence as Ferrando and Guglielmo. Brigitte Fassbaender’s Dorabella is lively, sexy and fun. But most thrilling of all is the superlative Fiordiligi of Margaret Price at her very best. And that means some stunning singing, both technically and interpretively.

Così fan tutte, as recorded here in Munich in 1978, is one of those ‘wish I’d been there’ occasions. Wolfgang Sawallisch, then music director of the Bavarian State Opera, conducts the most relaxed yet refined version imaginable. There is a natural and generous flow to the performance. There is also a palpable sense of atmosphere, the audience sounding genuinely amused in Act I, before a hush descends over the remainder (fear not, the sound is generally very clear and stage noise kept to a minimum). most thrilling of all is the superlative Fiordiligi of Margaret Price at her very best. And that means some stunning singing, both technically and interpretively.