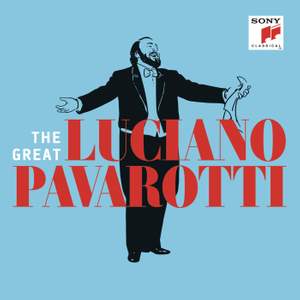 Fra poco a me ricovero

trad.: Happy Christmas (War is Over)

· His first album with Verdi arias remastered from the analogue tapes

Luciano Pavarotti, one of the most acclaimed and popular Italian tenors of all time, died ten years ago in his hometown of Modena. The whole world mourned the loss one of its most cherished celebrities. Pavarotti’s unmistakable voice with its open Italianate sound and ringing upper register was ideal for the operas of Verdi, Bellini, Donizetti and Puccini, but also the popular Italian and other repertoire that he and his admirers revelled in. Combined with his generous, charismatic personality, his thrilling vocalism made him into an icon, as famous as the rock stars he loved to perform with.

Pavarotti made only a handful of recordings for Sony Classical, but they occupy a unique place in his discography. An album of Verdi rarities, newly remastered from the original analog tapes, with Claudio Abbado conducting the Orchestra of La Scala, Milan, includes arias composed for Attila, Ernani and Les vêpres siciliennes as well as a recently discovered cabaletta from I due Foscari and an early fragment from an uncompleted opera, Il solitario ed Eloisa. Gramophone acclaimed the release, praising the tenors “remarkably polished” renditions, “always generous in provision of voice and spirit… Fine performances, both vocal and orchestral.”

Another CD rarity is the live recording “Luciano Pavarotti” in Concert, which brought the great tenor to Modenas Piazza Grande on 14 August 1985 for his first-ever concert in his native city. Needless to say, it was a joyous occasion. Joined by the “Arturo Toscanini” Symphony Orchestra of Emilia Romagna, conducted by Emerson Buckley, the international superstar serenaded his adoring fellow Modenesi with a programme of his greatest hits, including the most popular tenor arias from Lucia di Lammermoor, Rigoletto, Luisa Miller, La Bohème, Turandot, Fedora and Pagliacci plus, of course, such indispensable Italian songs as O sole mio, Torna a Surriento, Non ti scordar di me, Rondine al nido, Mamma and a heartfelt salute to Modena, Alla mia città.

In December 1999, Pavarotti was joined for a Christmas concert at the Vienna Konzerthaus by his great colleagues Plácido Domingo and José Carreras (they, as we all know, became the legendary “Three Tenors” when the world thrilled to their collaboration on the eve of the Word Cup Final at the Roman Baths of Caracalla on 7 July 1990). Accompanied by the Gumpoldskirchen Childrens Choir and the Vienna Symphony Orchestra under Steven Mercutio, their classical, popular and traditional selections from that Vienna evening range from Adeste fideles / O Come, All Ye Faithful, O Tannenbaum and Silent Night to White Christmas, Winter Wonderland, Amazing Grace and Pavarotti’s own composition, Ave Maria, dolce Maria