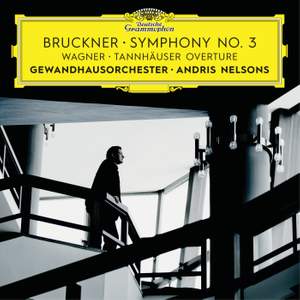 Might this be the start of a complete Bruckner symphonies from the Leipzig Gewandhaus Orchestra under Andris Nelsons? On the strength of this I very much hope so. The orchestra is still on with... — BBC Music Magazine, August 2017, More…

Andris Nelsons is Music Director of the Boston Symphony Orchestra and is the designated Gewandhauskapellmeister of the Gewandhausorchester Leipzig, with the appointment commencing in the 2017/18 season. With these positions, and in leading a pioneering alliance between these two esteemed institutions, two times Grammy Award winning Nelsons is firmly underlined as one of the most renowned and innovative conductors on the international scene today.

Since 2016 Andris Nelsons is a Deutsche Grammophon exclusive artist. Now, with his new orchestra, Nelsons is embarking on a long-term journey exploring the sound world of Anton Bruckner’s iconic symphonies.

This new and ambitious long-term recording project is consciously combined with the production of DG’s first complete Shostakovich cycle that Andris Nelsons is recording with Boston Symphony and that has already been awarded with two consecutive Grammy Awards plus various other awards.

Might this be the start of a complete Bruckner symphonies from the Leipzig Gewandhaus Orchestra under Andris Nelsons? On the strength of this I very much hope so. The orchestra is still on with a characteristic sound: warm strings and incisive woodwind, rounded and, when necessary, powerful brass.

As a Bruckner interpreter, Nelsons is direct, clear-sighted and spacious, the performance guided with a sure hand and a sense of inevitability but also meticulous in observing tempo and dynamic markings...The warmth and sonority of the playing at the start is enthralling and the performance unfolds with character and excitement.

For me, where this recording reveals itself to be a truly top-drawer Bruckner performance is in the quieter moments...while the brassy climaxes do ring out most satisfactorily, Nelsons brings such shape and poise to his sculpting of these long movements that I’m sure this performance will win over some new converts to the cause of Bruckner!

Nelsons offers a more youthful, impetuous Bruckner than his older colleague [Herbert Blomstedt], but one in which the strings shimmer and glow, while wind and brass combine to unfold the majesty of Bruckner’s “Wagnerian” conception in his first masterpiece. The playing is a marvel.

There’s consistently superb playing from all sections of the orchestra, but it’s the transparency of the strings that gives the textures such buoyancy; nothing is too emphatic or insistent. There’s room on the disc for Wagner’s Tannhäuser Overture too, another chance for the ensemble to show how superb it is.