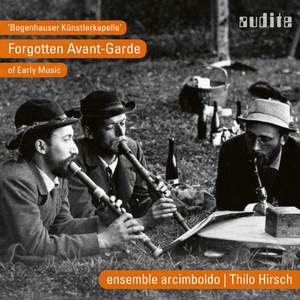 No less than fifty years before historical performance practice first rose to prominence, the Bogenhauser Künstlerkapelle (1899-1939) was already playing historical instruments - prompted not by academic interest, but by curiosity and the pure joy of music-making. Their unusual repertoire encompassed Bavarian folk music and street ballads together with works from the Renaissance, Baroque, Classical, and Romantic periods. Along with musicians from the Royal Bavarian Court Orchestra, the ensemble essentially consisted of visual artists and formed an integral part of Munich's cultural life in the early 20th century. During their concerts and radio appearances, the Bogenhausers regularly caused "a justified sensation in the Munich music world" (Bayerische Staatszeitung).

The works presented on this recording represent a cross-section of the varied repertoire contained in the original part books. Completely free of academic criteria, the Bogenhausers transcended stylistic boundaries in devoting themselves to whatever aroused their interest. We thus hear Chopin's Funeral March and minuets by Mozart and Bizet alongside Bach's Actus tragicus, compositions by Rameau, Corelli, and Arcadelt, alongside folk dances, and Frank Wedekind's Tantenmörder ("Aunt Killer").

The result is a unique document of the pioneering role played by the nearly-forgotten Bogenhauser Künstlerkapelle, which with its refreshing surprises that confound our expectations of the way early music is supposed to sound, is still highly compelling today. This rediscovery of the early music avant-garde is brought to life here by the ensemble arcimboldo with the original instrumentation.