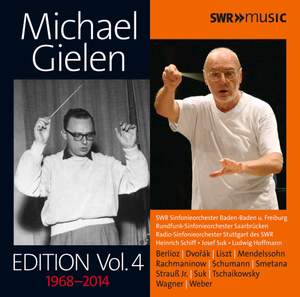 Most of the works are making first ever appearances or first appearances on CD and the breadth of repertory makes this an insightfully chosen selection that will make a direct appeal to Gielen’s... — MusicWeb International, August 2017 More…

Ostrov myortvikh (The Isle of the Dead), Op. 29

I. Voices of Life and Consolation

IV. In the Power of Phantoms

This new release is the latest installment in the Michael Gielen Edition, and it brings a sense of climax to the first four volumes. Of all the sets released so far, this latest volume contains the most first releases- 14 of the 23 works have never been released before, including extensive works such as Berlioz’s Requiem and Schumann’s Scenes from Faust. The set also contains recordings with international stars such as Heinrich Schiff (Dvorak Cello Concerto), Josef Suk (Dvorak Violin Concerto), Gunter Reich (Baritone, Faust) and Ludwig Hoffmann (Weber Piano Concerto No. 2). Other outstanding recordings include two particularly splendid interpretations from the Minnesota Music Festival (Weber’s Freischutz Overture and Weber’s Kaiserwalzer), plus Dvorak’s Violin and Cello Concertos, and Berlioz’s Symphonie fantastique. Michael Gielen’s controlled, intense direction is on display in each piece. Gielen was less known for his interpretation of music from the Romantic period. His recordings of such repertoire may form only a small part of his legacy, but they receive outstanding performances here, which will be appreciated not only by fans and collectors of Gielen’s work, but by music lovers in general.

Most of the works are making first ever appearances or first appearances on CD and the breadth of repertory makes this an insightfully chosen selection that will make a direct appeal to Gielen’s admirers.