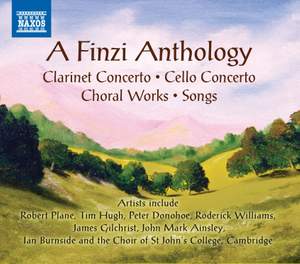 VII. Soliloquy I: The King's Poem

No. 1. I praise the tender flower

No. 2. I have loved flowers that fade

No. 4. Clear and gentle stream

No. 7. Wherefore tonight so full of care

No. 2. At Middle-Field Gate in February

No. 4. In Five-score Summers (Meditation)

No. 5. For Life I Had Never Cared Greatly

Finzi: Before and After Summer, Op. 16

No. 1. Childhood among the Ferns

No. 2. Before and after Summer

No. 4. Overlooking the River

There was a time when meadow, grove and stream

The Rainbow comes and goes

Now, while the birds thus sing a joyous song

Ye blessed Creatures, I have heard the call

Oh evil day! If I were sullen

But there's a Tree, of many, one

Our birth is but a sleep and a forgetting

Earth fills her lap with pleasures of her own

Oh joy! That in our embers

But for those first affections

Delightful Goddess, in whose fashionings

Changed is the age; mysterious, man's next star

How came you, lady of fierce martyrdom

How smilingly the saint among her friends

Wherefore we bid you to the full concent

No. 2. When I Set Out for Lyonesse

No. 1. To a Poet a Thousand Years Hence

No. 6. Ode on the Rejection of St Cecilia

Finzi: By Footpath and Stile, Op. 2

No. 2. Where the Picnic Was

No. 4. The Master and the Leaves

No. 5. Voices from Things Growing in a Churchyard

No. 1. A Young Man's Exhortation

No. 10. The Dance Continued

Finzi: Till Earth Outwears, Op. 19a

No. 4. Only the wanderer

Finzi: Fall of the Leaf

Finzi: Farewell to Arms for Tenor and small Orchestra

More than any other composer, Gerald Finzi (1901–1956) has come to embody the lyrical pastoralism so associated with English twentieth-century music. This anthology includes eight critically acclaimed recordings of Finzi’s works. The themes of fragility and transient existence are expressed in three early song anthologies with words by Thomas Hardy, Finzi’s favourite poet. Intimations of Immortality is a deeply touching lament for the passing of the freshness of childhood, while the tender Dies Natalis is a setting of texts by the 17th-century poet Thomas Traherne. Lo, the Full, Final Sacrifice takes the listener through a feast of moods and textures and ends with one of the most sublime Amens in all choral music. Finzi’s enchanting Clarinet Concerto was completed in 1949 in response to a commission from the Three Choirs Festival, and the Cello Concerto, with its elegiac slow movement, was composed when Finzi learned that he was suffering from an incurable illness and is one of his finest works.

Finzi's ineffable enchantment at word setting and musicality generally has an enduring place in pastoral-mystical-ecstatic British music. The only Finzi boxed set.

His music continues to be much admired and celebrated as it embraces a rich variety of moods, from elegiac lyricism, through spiritual reflection, to radiant joy.

His [Finzi’s] music continues to be much admired and celebrated as it embraces a rich variety of moods, from elegiac lyricism, through spiritual reflection, to radiant joy.