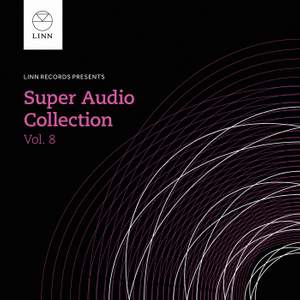 Sibelius: Symphony No. 2: I. Allegretto

Rodgers, R: Hello young lovers (from The King and I)

The eighth volume in the perpetually popular Linn Collection series features a captivating selection of tracks from its catalogue of award-winning artists.

The collection opens with an original song by the charismatic Joe Stilgoe whose first studio album on Linn, New Songs For Old Souls, is a masterclass in giving nostalgia a contemporary twist.

Linn’s enviable stable of pianists is represented by Gottlieb Wallisch and Ingrid Fliter, whose second album of Chopin was named ‘Recording of the Month’ and a ‘Top 10 Chopin Recording’ by Gramophone.

The symphonies of Sibelius and Schumann were given fresh impetus with recordings by Thomas Søndergård and the BBC National Orchestra of Wales and Robin Ticciati and the Scottish Chamber Orchestra respectively. Ticciati’s Schumann was awarded five stars by both BBC Music Magazine and The Guardian and was No. 9 in the Sunday Times’ prestigious ‘Top 100 Classical Albums of 2014’ listing.

Linn champions new arrangements and premiere recordings such as the premiere of Jonathan Morton's 2013 transcription of Shostakovich's Quartet No. 2, which was performed by the dynamic Scottish Ensemble alongside an ‘exceptionally lively and fresh'’ (Gramophone) performance of Tchaikovsky’s Serenade.

Released a month after winning a second Gramophone Award, John Butt’s solo outing of Bach’s famous ‘48’ was named ‘Outstanding’ and ‘a significant and enduring musical landmark’ by International Record Review.

Bookending the collection with jazz from the UK’s top performers are the Big Screen trio (David Newton, Tom Farmer and Matt Skelton) playing the Rogers & Hammerstein classic from The King and I and the inimitable Claire Martin, who signs off the collection with a track from her brilliant 2014 album Time & Place.