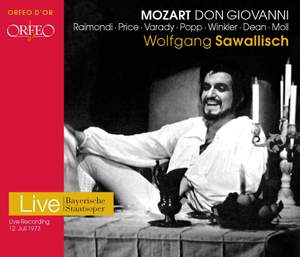 Sawallisch's account of Anna's hysterical recitative before 'Or sai, che l'onore' is an object lesson in dramatic pacing...Raimondi is lively and witty, powerfully defiant at the end, but with... — Gramophone Magazine, May 2015 More…

Even at the big opera houses it’s a real stroke of luck if a production of Mozart’s Don Giovanni doesn’t just have a charismatic Don, but a whole ensemble that’s able to exert its magnetism over the assembled audience (and who thus manage not to follow the Don’s example – after all, his attempts at conquest go awry throughout the opera, with only the memories of earlier conquests remaining). This rare constellation – having an engaging title hero whose gifts are matched by the objects of his passion – in fact came about in 1973 at the Munich Opera Festival. Ruggero Raimondi was in his early 30s at the time and his unmistakeable, agile, irresistible bass-baritone voice veritably conquered the Bavarian State Opera. In the process he established himself as the Don Giovanni of his generation. But while he was the centre of attention, he was by no means the only sensation of the production. With Margaret Price as Donna Anna, Julia Varady as Donna Elvira and Lucia Popp as Zerlina he was faced with a trio of sopranos who in their individual arias and in their numerous, tricky ensemble numbers turned the evening into a musical feast – as we can now hear in this live recording of the opening night. In the midst of these powerful, highly individual personalities, Hermann Winkler’s lyric dramatic tenor and Stafford Dean’s agile lyric buffo bass were well able to hold their ground as Don Ottavio and the servant Leporello respectively. Enrico Fissore offered a vigorous Masetto, while Giovanni’s final descent into hell – which leaves shivers down many a spine – was made doubly gripping by the dark bass of Kurt Moll’s Commendatore and by Wolfgang Sawallisch at the helm of the Bavarian State Orchestra. This was a Don Giovanni of fast-paced tempi, with a momentum brilliantly geared to the dramatic trajectory, carried by the lyrical qualities of its singers, and with a perfect sense of poise and exhilarating intimacy at just the right moments.

Sawallisch's account of Anna's hysterical recitative before 'Or sai, che l'onore' is an object lesson in dramatic pacing...Raimondi is lively and witty, powerfully defiant at the end, but with little sense of the character's dark side. For my money, the male star...is Stafford Dean...a perfect Leporello...Price as Anna is formidably secure, with lovely, smokey tone in 'Non mi dir'.

Varady’s live-wire performance, sung with dark beauty, offers everything save fully idiomatic Italian. Price has tremendous impact in the role that had catapulted her to European stardom in Cologne two years before: purely instrumentally, her Anna gives much pleasure, though her fierce dramatic commitment may surprise some listeners. Popp’s silvertoned Zerlina is enchanting from start to finish.

Sawallisch conducts a magnificently brisk and magisterial interpretation and the sound is generally very good…Ruggero Raimondi reminds us why his Giovanni was so celebrated, the sheer charisma of his voice providing the presence and sexiness so often lacking in the role…Each voice is glorious…[an] outstanding cast.