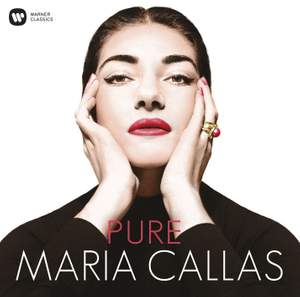 One of the 20th century’s most legendary and enduring icons, Maria Callas was both a glamorous diva and a global superstar who captivated audiences worldwide with her vivid and passionate performances. This disc features Callas in a glittering selection of opera favourites that showcase her unique voice and her heart-breaking portrayal of tragic heroines.

Opera singers come and go, but just a few – the legends – live on. And Maria Callas was the greatest legend of them all, though not just for the wonder of her voice. She changed the way people thought about opera, but she also became famous as the glamorous celebrity who fell in love with Aristotle Onassis, leaving her elderly husband to live with him on his yacht Christina and enjoy the high life with the international jet set. Of course it ended badly. She lived her life like one of her own tragic heroines who (as women tend to do in opera) sing, suffer and die. And her own death came at just 53, after a dazzling but short career that took in heavy roles alongside decorative, nightingale-like ones – ignoring the established rules of vocal health and probably explaining why her voice finally gave out as it did. But in that time she did extraordinary things, using the muscle of those heavy heroines to empower the nightingales with strength and depth of feeling nobody had thought to offer them before. She gave them credibility as drama. Her performances were absolute and self-exposing: she held nothing back. And she was even tougher on herself than she could be on others – which is why her voice was never quite the flawless instrument singers are meant to cultivate. Her personality was far too volatile and too self-sacrificing in its love affair with risk. In the mythology of opera, though, that’s what the audience demands. We want the diva to be both a goddess and a slave: to give her life for art. We thrill to the dimension of that sacrifice. And Callas dutifully obliged.