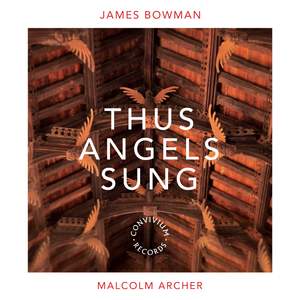 Farrant, R: Hide Not Thou Thy Face (Arr. for Solo Voice & Organ)

Archer, M: When Jesus Christ Was Yet A Child

The Trees They Grow So High (Arr. B. Britten for Solo Voice & Piano)

No. 3, The Rain It Raineth Every Day

Attwood, T: Turn Thy Face from My Sins (Arr. for Solo Voice & Piano)

James Bowman has been one of the world’s leading counter-tenors for over 40 years; his career spans Opera, Oratorio, Contemporary music and solo recitals. In May 2011 he made his farewell to the London concert platform with a sold-out recital at London’s Wigmore Hall, singing Purcell and Handel. However, he still appears occasionally at venues away from the capital...

"There is absolutely no rhyme or reason behind the selection of pieces on this recording, and this is intentional. Every piece was chosen at random, simply because I happened to like them and wanted to record them. I have been lucky enough to have had a recording career that started over 45 years ago, having made my first recording for His Master’s Voice, with King’s College Choir in 1967. Since then I have made some 180 recordings, stretching from black discs through tape cassettes, to CDs. Actually, I made my original demo recording on a wax disc, and this was sent to David Willcocks in Cambridge for his approval.

At the end of a recording career there are always pieces lurking at the bottom of the barrel that you wanted to record, but somehow they never seemed to fit into the scheme of things. So here are those ‘Odds & Ends’ and I have to admit they make a very disparate collection.

The only pieces actually written for counter-tenor are the three songs by Malcolm Archer and the little Grace before Dinner by Christopher Moore. Other pieces have been transposed and rearranged to suit my voice. I’ve always loved Elgar, but he wrote nothing for counter-tenor, so I’ve taken the liberty of including the lovely ‘Where corals lie’ from Sea Pictures. I wonder what Dame Clara Butt would make of this." James Bowman