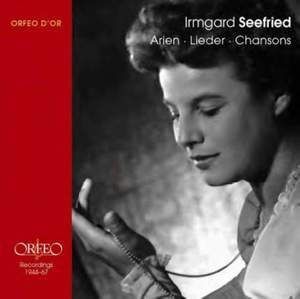 what a fresh-sounding Eva she [Seefried in Die Meistersinger] is … the transfers are clean … a detailed picture of Seefried’s art. — International Record Review, June 2014 More…

No. 5. Abendgebet (Going to Sleep)

No. 7. Steckenpferdreiter (On the Hobbyhorse)

It was 25 years since the death of Irmgard Seefried on 23 November 2013, yet this soprano’s magnificent artistry is still remembered well by music-lovers today. She came originally from Swabia, and after making her stage debut in Aachen (where she worked for the first time with Herbert von Karajan) she moved to the Vienna State Opera in 1943 and remained attached to the house for more than 30 years. She developed into one of the most important singers of her time, especially in Mozart repertoire. Her performances and recordings as Pamina, Susanna and Fiordiligi under conductors such as Karl Böhm and Joseph Krips made her into a role model for generations after her. Excerpts from these roles can now be heard in this anniversary box from ORFEO in fully restored sound: many were hitherto unavailable, or available only in poor copies on the grey market.

The collection begins in the year 1944 and features excerpts from well-known radio productions under Karl Böhm (Mozart’s Zauberflöte, Beethoven’s 'Fidelio', Wagner’s 'Meistersinger' and Strauss’s 'Ariadne auf Naxos') alongside other, less well-known recordings of individual arias by Haydn, Weber and Puccini under the baton of Leopold Ludwig. Her Mozart performances, which took her all over the globe, are documented here with various conductors including Ernest Ansermet, Wilhelm Furtwängler and Bruno Walter. Besides her star roles mentioned above we find works here such as the motet 'Exsultate, jubilate' and the aria 'Non temer, amato bene', in which her husband Wolfgang Schneiderhan took the violin solo part, as he often did during those years when Seefried was at the height of her career. Naturally, a homage to Irmgard Seefried cannot omit her song repertoire. This is documented here by a selection of radio recordings from the 1950s and ’60s. Whether in songs by Haydn and Mozart or by Schubert, Schumann and Brahms, her diction is always remarkable. Furthermore, her musical approach was thoroughly natural (in the best sense of the word) and this always allowed Seefried to establish a direct connection with her audience. This is especially the case for the programme chosen for the last CD, which at first glance seems a little odd: Mussorgsky’s 'Nursery songs', recorded in 1958 with her 'constant' accompanist Erik Werba, and 'Chansons from three centuries', a German Radio broadcast from 1967. These add new, fascinating aspects to round off Irmgard Seefried’s artistic profile.

what a fresh-sounding Eva she [Seefried in Die Meistersinger] is … the transfers are clean … a detailed picture of Seefried’s art.

there's a freshness to many of these performances that make them preferable to her studio versions, superb though they are...this is a wonderful tribute – essential listening if you already love her work, and the perfect introduction to it if you don't.