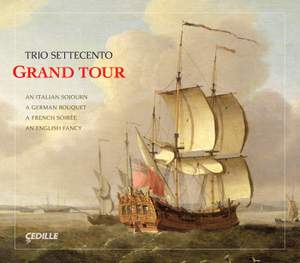 Tartini: Sonata Pastorale in A Major

Fugue for Violin and Harpischord in G Minor, BWV 1026

Erlebach: Trio Sonata No. 3 in A major

Couperin, F: Concert No. 3 (Concert Royal) in A major

Rameau: Concert No. 4 in B flat major

Locke: Suite No.4 In B-flat (from the Little Consort)

The Married Beau, Z. 603, "The Curious Impertinent": Hornpipe on a Ground

The Fairy Queen, Z. 629: Dance of the Chinese Man and Woman

The sublime early-instrument ensemble Trio Settecento (1700s Trio) has taken listeners on an unprecedented country-by-country Grand Tour of the European Baroque through a series of four recordings, issued individually between 2007 and 2012. Each album provides an in-depth exploration of the musical styles of a single country - Italy, Germany, France, England. Now, the entire critically acclaimed series is available as a specially priced boxed set.

Trio Settecento brings fresh insights to music from the Age of Enlightenment through its passionate, authoritative and distinctive interpretations. The trio of Billboard chart-topping violinist Rachel Barton Pine, cellist and violist da gamba John Mark Rozendaal, and harpsichordist and organist David Schrader perform music by composers likely to be familiar to even casual fans of Baroque music. But they also proceed to offer a wealth of delightful discoveries by composers less well known

'An Italian Sojourn' focuses on the Italian and Italian-influenced composers who were enamoured with the newly emergent solo “voice” of the violin.

On 'A German Bouquet', Trio Settecento takes listeners beyond the music of Bach and Buxtehude. While the CD includes works by those two giants of the German Baroque, it also offers rarely heard repertoire by composers who were among the greatest German violinists of the era.

Trio Settecento captures the poetic gestures of the Gallic school on 'A French Soirée', a program that illuminates divergent cultural sensibilities of Baroque France. Some works illustrate the regal, socially conservative and authoritarian aesthetic of the court of Louis XIV. Others, which would have been heard in the salons of disaffected nobles and wealthy merchants, reflect a more free-spirited, cosmopolitan and humanistic outlook.

'An English Fancy' focuses on the fantasy, the form that infatuated English Baroque composers. Listeners venture into unusual realms of sonic imagination by virtue of the daring experiments in melody, harmony, counterpoint and other musical elements heard in these 16th- and 17th-century works.