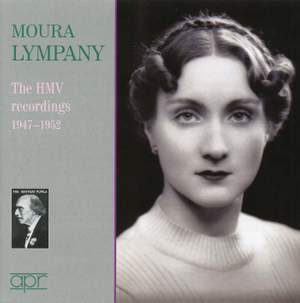 Dame Moura's virtuosity quietly stuns. Her Mendelssohn, Liszt and Litolff are fleet and joyful; Granados's The Maiden and the Nightingale and Debussy's Clair de lune sing from the heart. — BBC Music Magazine, October 2013, 4 out of 5 stars More…

MOURA LYMPANY (1916–2005) was the last of the major Matthay pupils and she started working with him in 1937 when he was already 79. In 1938 she shot to international fame when she came second to Emil Gilels in the Queen Elisabeth competition. A brilliant technician, she followed in the footsteps of Scharrer and Joyce, though was perhaps temperamentally cooler that either.

Initially, she specialised in major works of the romantic and Russian repertoire and made the first complete recording of the Rachmaninov preludes (for Decca) in the 1940’s. She also gave the western premiere of Khachaturian piano concerto and subsequently recorded it; along with the Rachmaninov 2nd and 3rd concertos it become one of her signature works. The HMV recordings presented here, made before she returned to recording for Decca again in the later 1950’s, emphasize her virtuoso credentials and feature many of the piano’s most fearsome warhorses. This is repertoire she excelled in and her performances of, for example, Feux follets, or the toccatas of Ravel and Prokofiev, have rarely been equalled.

Dame Moura's virtuosity quietly stuns. Her Mendelssohn, Liszt and Litolff are fleet and joyful; Granados's The Maiden and the Nightingale and Debussy's Clair de lune sing from the heart.

The highlight of this collection is the Schumann Symphonic Etudes...Each of the variations is well-characterised. There is drama and energy on the one hand, and lyricism and richness of expression on the other, with superb attention to detail...This is an impressive tribute to a fine British pianist.