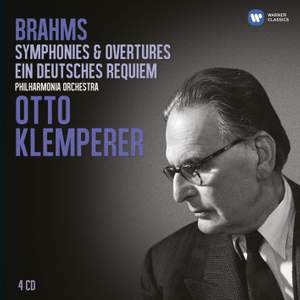 Otto Klemperer was born on 14th May 1885 in Breslau, Silesia (now Wroclaw, Poland) and died on 6th July 1973 in Zurich and hence next year we mark 40 years since his passing. He had had a remarkable career as a young man but it was at the age of 70 that he started a series of recordings that would not only establish him as an internationally renowned conductor but provide EMI with a catalogue of recordings that became and remain touchstones.

Besides being a great conductor Otto Klemperer was also a composer and when listening to his compositions you are left in no doubt that he was much influenced by the music of Brahms. It was therefore natural for Walter Legge, founder of the Philharmonia Orchestra and one of EMI’s chief recording producers should want to acquire recordings of the four symphonies of Brahms to set alongside those of Beethoven. The set also includes the Academic Festival Overture and Tragic Overtures and the “Haydn” Variations. For the soloist in the Alto Rhapsody Legge turned to the great mezzo-soprano Christa Ludwig.

In 1961 Klemperer returned to recording Brahms by committing his classic performance of Ein deutsches Requiem to disc. With the soprano Elisabeth Schwarzkopf and baritone Dietrich Fischer-Dieskau as soloists and the magnificent Philharmonia Chorus this recording has remained a firm fixture in the EMI Classics catalogue since its first release.