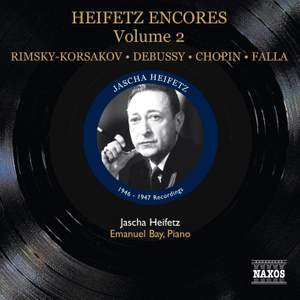 Preludes, Book 1: No. 8. La fille aux cheveux de lin (The Girl with the Flaxen Hair) (arr. A. Hartmann for violin and piano)

Excerpt,  Korngold: Much Ado About Nothing, Op. 11: suite for violin (or cello) & piano

4 Pieces from Much Ado about Nothing, Op. 11: II. Holzapfel und Schlehwein

4 Pieces from Much Ado about Nothing, Op. 11

4 Pieces from Much Ado about Nothing, Op. 11: III. Gartenscene

5 Pieces: No. 3. Mouvement perpetuel (version for violin and piano)

Over four days of sessions in Hollywood during 1946 and 1947, Jascha Heifetz and his regular accompanist Emanuel Bay recorded this evocative series of encores. The repertoire was wide-ranging, and included three Spanish pieces by Sarasate, Nin and Ernesto Halffter, all delectably played, in his only recordings of them. He turned also to his own transcription of Bax’s Mediterranean as well as to staples such as Rimsky-Korsakov’s dazzling Flight of The Bumble-Bee. Throughout, Heifetz’s bowing, pizzicati, double stops, glissandi and inimitable portamenti grace these pieces with incredible freshness.