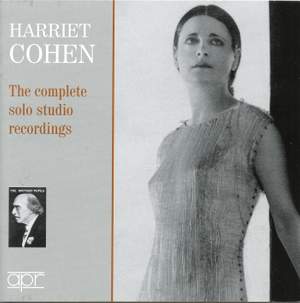 Certainly the most glamerous of the Matthay students, Harriet Cohen was also the most extrovert and to the general public was known as a socialite as much as a pianist. Her friends included George Bernard Shaw and Ramsay MacDonald and she became notorious as the lover of the married Arnold Bax. Behind this apparently superficial exterior lay a surprising intellect and her repertoire favoured Bach and earlier music or contemporary music (much of it dedicated to her) rather than the more popular, and frequently played, romantic repertoire.

Few of her recordings have been reissued on CD so this will be an eagerly awaited set. It includes the first ever (acoustic) recording of Bach’s D minor concerto, and the later post-war remake, and also several of the works Bax wrote for her.