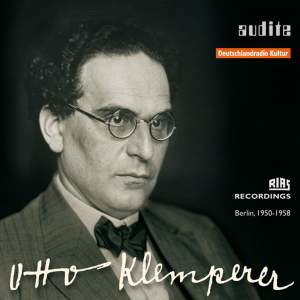 I. Awakening of Cheerful Feelings Upon Arrival in the Country: Allegro ma non troppo

These live and studio recordings with the RIAS Symphony Orchestra Berlin (later known as the Radio Symphony Orchestra Berlin), made between 1950 and 1958, are important documents of the rebuilding of German culture after the war. These recordings illuminate Klemperer’s late performing style, his repertoire and his interpretational ideals. He explored the repertoire of the 18th to the 20th centuries by creating three-dimensional sound, concise rhythms, clearly contoured forms and precise characterisations. He interpreted the works of Mozart and Beethoven; through Mahler and Hindemith he forged a connection to the music which had been banned by the Nazis. With this new 5-CD boxed set, Audite documents the artistic cooperation between Klemperer and the RSO Berlin, for the first time, using original tapes from the RIAS (today’s Deutschlandradio Kultur) sound archives, thus also ensuring the best possible technical quality.