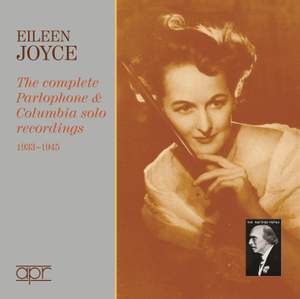 This is such a cornucopia of good things it is hard to know where to start...[in the Bach] Joyce's deft, sparingly pedalled light touch, her nonchalant speed and fluency and a palpable enjoyment... — Gramophone Magazine, December 2011 More…

Friedman, I: Viennese Dance No. 2

This set is this first in a new APR series featuring pupils of the great British piano teacher, Tobias Matthay.

TOBIAS MATTHAY (1858–1945) is the greatest piano teacher Britain has produced. From the 1890s to the 1930s, first at the RAM and then also at his own school, he almost singlehandedly produced a generation of concert pianists who launched an English piano tradition. York Bowen was an early pupil, but those best remembered are a group of female pianists; Harriet Cohen, Myra Hess, Irene Scharrer and Moura Lympany, all of whom will feature in this APR series.

EILEEN JOYCE lies somewhat outside this mainstream, as she trained principally in Germany, but she did have three years of finishing studies with Matthay between 1930 and 1933.

Eileen Joyce was born in Tasmania in 1908 to poor immigrants of Irish descent. Her father was an itinerant labourer and the family soon moved to Western Australia where the young Eileen discovered the piano and, in spite of much hardship, soon developed an astonishing playing ability. Heard by Grainger and Backhaus, who both praised her, she was sent off to Germany where she studied for three years with Robert Teichmüller. She came to England in 1930 with a recommendation which led to her Proms debut in that year playing Prokofiev's Third Concerto. She also commenced her advanced studies with Matthay.

After a slow start, her career blossomed exponentially from 1933 when she made her first recording. This disc, of Paul de Schlözer's Etude Op1/2 and Liszt's La Leggierezza is still regarded as one of the most astonishing examples of virtuosity ever recorded.

From this time until 1960, when she suddenly retired from performing at the age of 52, she was one of Britain's best loved pianists.

She appeared 37 times at the Proms, gave the British premieres of both Shostakovich concertos and became known to millions as the pianist playing Rachmaninov's Second Concerto in the film 'Brief Encounter'. Her greatest recordings are from the 78rpm period and we present all of these, with the exception of her concerto performances and a few later Decca discs. Eileen was a natural pianist with a big rich sound and very fast fingers; she is at her best in the many brilliant encore type pieces she recorded but she was equally stylish (and brilliant) in Mozart and had a special affinity with the wistful nostalgia of Grieg.

Most of these recordings have never been transferred to CD before so this set is a 'must' for all enthusiasts of great piano playing from the past.

This is such a cornucopia of good things it is hard to know where to start...[in the Bach] Joyce's deft, sparingly pedalled light touch, her nonchalant speed and fluency and a palpable enjoyment of the task in hand are characteristic of her approach as a whole, which serves well the dizzying pace of the Fugue in particular.

Whatever pressures she might have been under during her career, the quality that comes across in these performances is the sheer joy of playing. Joyce possessed a formidable technique and an interpretative mind that blended stylish sensibility with passion...Joyce’s breadth as well as her impeccable touch and distinctive artistic personality are valuably recalled here.