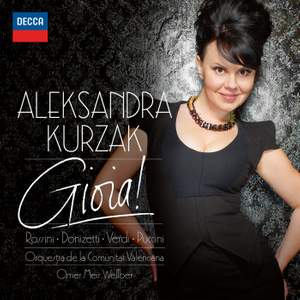 Kurzak impresses as a coloratura soprano of the old school — BBC Music Magazine, September 2011, 3 out of 5 stars More…

The lyric soprano Aleksandra Kurzak is one of the most exciting young singers on the international stage - thrilling press and public alike with her performances in Europe and the US. "Gioia", her debut on Decca, is the eagerly anticipated proof of her excellence. This debut is capturing the current state of Aleksandra's voice by contrasting lyric and coloratura arias, focusing on roles which she has performed on stage. The album features much-loved Puccini arias from La Bohème and Gianni Schicchi, bel canto showpieces from I Puritani and Lucia di Lammermoor and the taxing First Act aria from La traviata "Sempre libera" which showcases both her effortless agility and the full, warm intensity of a Verdi lyric soprano.

“A rising-star soprano with flashing eyes and cover-girl looks” (The Observer).

Kurzak impresses as a coloratura soprano of the old school

So, what's special? The tone quality of the voice, in which an apparently endless sparkle is subtly coloured by darker, East European tints. The accuracy of pitch and intervals...The ability to act with the voice (Adele and Lauretta, which follow each other here, sound really radically different). Also, and it's not as common as you may think, she conveys a real understanding of the text.

Kurzak's technique is well honed, scale-work clearly surmounted, no slovenly sliding through the fioritura, and her timbre is most agreeable, having no rawness to spoil the euphony. One can say that her voice does not have the number of colours that a soprano with a larger voice might display, but I did not find that I was bored at any time.

her musical intelligence ensures that there is no hint of monotony here even in some over-exposed repertoire...She achieves everything without resorting to show-off tactics; indeed, a few numbers might almost be described as reserved. Every track gives pleasure, but highlights include a seductive ‘Deh vieni’

there’s not so much as a hint of shrillness even at the very top of the voice: her warm middle register has a mellowness and body which isn’t normally associated with coloratura sopranos and she never lapses into the generic arch mannerisms which can sometimes creep into these roles...Kurzak simply exudes joy from beginning to end.

There's a gamine appeal about young Polish soprano Aleksandra Kurzak, who brings an innocent enthusiasm to the arias on this debut collection, negotiating the richly ornamented phrases with an almost exultant relish. Her joie de vivre is well-suited to the "laughing aria" from Die Fledermaus...while her vibrato during "Regnava nel silenzio"...is so controlled it's astonishing to learn she received no vocal training till she was 19.

there’s no doubt that her voice is stupendous: firm, true, crystal-clear in coloratura, beautifully rich in legato. I enjoyed this far more than recent releases by more famous sopranos.