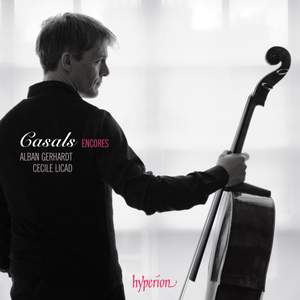 Gerhardt has a honeyed, liquid tone all his own. He has created a well-contrasted programme that clearly took a long time to research and hone...This is cello playing of exquisite sophistication... — BBC Music Magazine, August 2011, 5 out of 5 stars More…

Boccherini: Sonata in A major, G4

Kreisler: Chanson Louis XIII and Pavane (In the style of Couperin)

anon.: The Song of the Birds

This sensational new release from German cellist Alban Gerhardt recaptures the novelty of the much-loved encores performed by Pablo Casals. Spanish-born Casals was universally recognized as one of the world’s greatest cellists and had a vast repertoire of intimate encores which were adored by his audiences. The disc features transcriptions of works by many notable composers including Fauré, Chopin, Saint-Saëns, Boccherini and Wagner. Also featured are frequently performed musical gems by David Popper: Vito, Chanson villageoise and his Mazurka in G minor, pieces which have gained a special place in the cello literature.

Gerhardt performs these miniature masterworks with extraordinary finesse and verve. His very personal interpretations never lapse into self-indulgence and he projects a distinctive luminescence of tone with infallible intonation. Gerhardt is intelligently partnered and perfectly matched by pianist Cecile Licad on her Hyperion debut. This unique disc demonstrates sublime musicianship, with both performers revelling in a wide expressive scope from the vivacious to the lyrical.

Gerhardt has a honeyed, liquid tone all his own. He has created a well-contrasted programme that clearly took a long time to research and hone...This is cello playing of exquisite sophistication and bold imagination. Casals, I feel sure, would have approved.

An unexpected disc from a cellist one usually thinks of as a heavyweight...he brings to them absolutely the same seriousness of approach and sensitivity that he does to everything. And it works for an album that feels worthwhile as well as easily digestible.

his playing [is] less heart-on-sleeve than Casals's own, but wonderfully eloquent and noble: he can be extraordinarily moving in such once-familiar standards as the Berceuse from Godard's Jocelyn, or in Casals's arrangement of Chopin's Raindrop Prelude...Some of this music makes considerable demands on the pianist, and Cecile Licad rises to its challenges with considerable elegance.

There is much more to an encore, as Alban Gerhardt will tell you, than casually capping a recital with an audience-pleaser...Listen to Gerhardt in Benjamin Godard’s Berceuse de Jocelyn and there is a paradigm of the exceptional eloquence and discernment that distinguishes the entire disc.