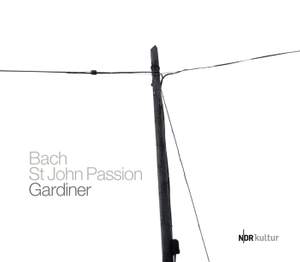 To borrow a phrase used more than one by Gardiner, his is a reading which lives viscerally in the 'here and now'...throughout, the Monteverdi Choir is typically alert and tautly-sprung. Crowd... — BBC Music Magazine, July 2011, 5 out of 5 stars More…

This album was recorded in Königslutter in 2003.

The booklet contains original notes by John Eliot Gardiner and texts in German, English and French.

Considered to be an expressive and intimate oratorio, the St John Passion was conceived by Bach both as a work of art and an act of worship in itself.

It has a subtle balance between narrative and contemplative, juxtaposing vivid re-enactment and dramatic scene-setting in the ariosos and arias, with stretches of exposition of its meaning in chorales.

The music is in turns evocative, stirring, exultant and profoundly moving. It forces the listener to contemplate the complexities of the Passion story. Regardless of one’s religious view, it captures our attention from beginning to end.

To borrow a phrase used more than one by Gardiner, his is a reading which lives viscerally in the 'here and now'...throughout, the Monteverdi Choir is typically alert and tautly-sprung. Crowd scenes crackle with indignation...while the chorales are loving sculpted around a close reading of the texts...Padmore's Evangelist holds the whole together with the supple, hypnotic élan of a born story-teller...Truly this is a jewel beyond price.

Gardiner sets the waves gently but urgently lapping in a perfectly judged opening...Padmore's Evangelist is commanding, tireless and beautifully enunciated...There surely cannot be a better account on record. From first to last Gardiner imparts his love for the work and it comes across. The performers share his view and so do we. The liveness of the recording is palpable.

These performances, taped at the end of an English Baroque Soloists tour in 2006, exude a tremendous sense of common purpose and an un-dogmatic stylistic assurance...Gardiner gets the music to “speak” without ever sounding fussy. In short, he achieves that rare feat of revitalising the familiar.

Padmore's Evangelist is both ringingly true and acutely observed...perhaps the most disarming quality overall is that Gardiner's understanding of devotional ritual - drawn unquestionably from his unique Pilgrimage a few years earlier - translates into a new world, not wrinkle-free but one where sadness and hope seem to hover as tantalisingly in this work as I have heard.