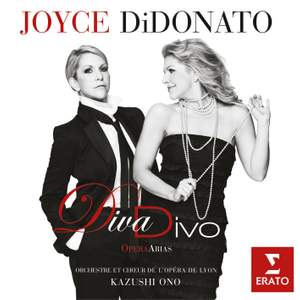 Proof of DiDonato's consummate musicianship is everywhere here...For sheer beauty of tone, legato that defies gravity and singing that restores your faith in human nature, listen last of all... — BBC Music Magazine, April 2011, 5 out of 5 stars More…

Joyce DiDonato celebrates the rich dramatic variety of the mezzo-soprano voice in this collection of arias for different characters – of both sexes – from a single opera, or from different operatic treatments of the same story.

Joyce DiDonato’s capacity for characterisation is as astounding as the range and flexibility of her voice. As her Virgin Classics recitals of Handel and Rossini have proven, she can charm and touch as a good girl, seduce and seethe as a bad girl, and slip believably into the trousers of a hero. As Opera News said of the Rossini disc, ‘Colbran, The Muse’: “With her sure sense of line and colour, DiDonato takes possession of the repertory, mining every musical and vocal gesture to inhabit each character confidently … Her theatrical sense is magnificent. Musically and dramatically, the disc is perfection.”

This new collection showcases DiDonato’s multi-faceted art – and the wealth of opportunities open to a mezzo-soprano – by presenting her as different characters, both male and female, from the same opera or from different musical treatments of the same story.

As DiDonato explains: “This recital celebrates the vast and fabulous world of the mezzo-soprano. Aside from the obvious Toscas or Cio-Cio Sans, I've never regretted the length of my vocal cords!

I have the privilege and unmitigated joy of playing boys and young men, as well as girls and grown women … It’s an exploration of the human palette of emotions.

“I wanted to find a way to show this duality on disc, while highlighting some of the composers I'm most passionate about, such as Mozart, Bellini, Berlioz, Rossini, and Massenet. In exploring this idea, the possibility became clear for telling different sides of some of the most familiar tales which have served as inspiration for operatic legends: Cinderella, Faust, Romeo and Juliet … I've always thought of myself as a storyteller, and with this particular disc, I can showcase that side of me as never before. I'm ready to play!”

The programme features several roles that DiDonato has sung on stage – such as Rossini’s Cenerentola (it was the character’s gentle, then exuberant ‘Nacqui all’affanno’ that launched her international career at Plácido Domingo’s Operalia competition, and subsequently at La Scala), Bellini’s Romeo and Mozart’s Cherubino. The ‘flip sides’ of those characters are roles that have not featured in her repertoire: the Prince from Massenet’s Cendrillon (a lavish treatment of the Cinderella story more likely to bring DiDonato in the title role – as at Santa Fe in 2006 and, in 2011, at Covent Garden); the Nurse from Berlioz’s Roméo et Juliette, and both Chérubin (from Massenet’s ‘sequel’ to Le nozze di Figaro) and Susanna. The Figaro connection continues with an excerpt from Il barbiere di Siviglia (Rosina, of course, later becomes Countess Almaviva), while other operas on the programme, from the Renaissance to late Romanticism, include La clemenza di Tito (Sesto and Vitellia), Faust, La Damnation de Faust, Mefistofele, Orphée et Eurydice, Orfeo and Orphée aux Enfers.

As John von Rhein wrote in Gramophone: “In complete control vocally, Joyce DiDonato is … consumed by the character. She embodies whomever she’s playing and whatever emotional situation she is evoking.”

Proof of DiDonato's consummate musicianship is everywhere here...For sheer beauty of tone, legato that defies gravity and singing that restores your faith in human nature, listen last of all to what Joyce DiDonato does with Berlioz's 'D'amour l'ardente flamme'. Diva or Divo, this is the real thing.

Listening to DiDonato depict both [Cherubino and Susanna]...brings home just how deeply this singer can inhabit character...The American mezzo delivers this ambitious, imaginative programme with intelligence, musicality, vocal brilliance and immense charm. There's some lovely playing from the Lyon Opera Orchestra too.

DiDonato's tone and phrasing catch a genuine male authority in the first entry of Bellini's Capuleti Romeo...Cendrillon and the (to Anglophones) rare Ariane are utter, and quite dark, delights. Elsewhere the Mozart is enjoyed and well negotiated - the lower colouring makes Susanna sound mature and knowing.

I can find nothing but praise...This recording gives enormous pleasure in rare as well as familiar repertoire...the mezzo invariably finding the right colour for each portrayal...Perhaps the best thing about this recital is that everything DiDonato sings sounds spontaneous, as if the character her- or himself were actually experiencing it for the first time.

DiDonato’s is a five-star voice, perhaps the finest lyric mezzo before the public today...Ono’s Lyons orchestra and chorus give her voice luxury support, and her growing army of fans won’t be disappointed.

It's playful, as well as an ideal vehicle for her glorious mezzo voice in which the most fiendish coloratura ornaments and trills sound effortless.

she is steadily terrific: technically secure, nimble and clean in her flourishes and roulades, always alert to dramatic nuance. Nor do we lack variety. First, a swaggering, tipsy aria for Cherubino from the luxuriously coloured Chérubin (Massenet again). Then we jump to Mozart’s Susanna, intimate and tender in The Marriage of Figaro. So it goes: jolting, fascinating, entertaining.

A 10-minute introductory video about the project