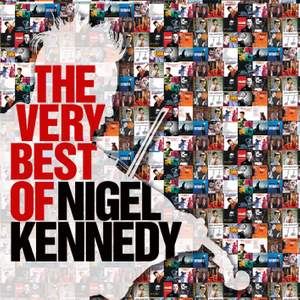 The Very Best of Nigel Kennedy

Rimsky Korsakov: The Tale of Tsar Saltan, Act III: The Flight of the Bumblebee (Arr. for Violin and Orchestra)

Silver, H: Song for my Father

Kennedy, N: Carnivore of the Animals

Kennedy, N: Maybe in your Dreams

Classics is proud to announce the release The Very Best of Nigel Kennedy. This 2-CD set celebrates the multiple facets of the award-winning, multi-million record selling violinist, featuring works from his twin passions, classical and jazz.

The first disc focuses on classical music, featuring Kennedy’s iconic recordings of the best-loved violin repertoire: movements from the great concerti including Bruch and Beethoven; stand-alone works such as Zigeunerweisen and Lark Ascending; and from his landmark recording of Vivaldi's Four Seasons. Kennedy’s 1989 release of the baroque masterpiece, named the best-selling classical recording of all time by the Guinness Book of World Records, topped the UK Classical Charts for over a year, reached #3 on the UK Pop Album chart and has sold more than two-million copies world wide. At one point, Nigel was selling more records a week than the combined total of the other 19 records in the UK Classical Sales Chart.

The second disc features tracks from his award-winning and critically acclaimed jazz and pop recordings: standards from his Blue Note Sessions album, performances of his own pop and fusion compositions with the Nigel Kennedy Quintet and with Polish klezmer trio Kroke, as well as tracks from his most recent EMI Classics release Sssh!, including his collaboration with Culture Club singer Boy George.