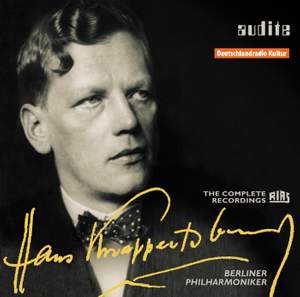 III. Dance of the Sugar-plum Fairy

VII. Dance of the Reeds

VIII. Waltz of the Flowers

This production is of high documentary value and definitely one of Audite's priority productions for 2010. During the early 1950s, before the Karajan era, the conductor Hans Knappertsbusch (1888-1965) worked intensively with the Berlin Philharmonic. The core-period of this cooperation from 1950 until 1952 in particular is documented by high-quality recordings made by RIAS Berlin, both of live concerts and of studio productions. For the first time, the original tapes from the RIAS archives have been made available, which means that these CDs offer the highest possible technical quality. This 5-CD set includes on the one hand a variety of symphonic works and on the other ‘light music’: two differing facets of Hans Knappertsbusch’s repertoire. The recordings of this edition convey a fascinating view on Knappertsbusch’s art. This comparison of live and studio recordings illustrates the influence of medium on Kna’s interpretational aesthetic: in concert, he takes greater liberties in tempi and dynamics than in the more objective studio location. This is also shown by the comparison of concert and studio recordings of Schubert’s ‘Unfinished’ Symphony and Bruckner’s Ninth Symphony, two key-works in this edition. At the same time, the recordings disprove the one-sided view of Knappertsbusch as a master of slow tempi. Whereas he has a more expansive take on time in Beethoven’s Eighth Symphony, he tends to choose even more fluid tempi in his interpretations of the great Bruckner symphonies than Bruckner specialists such as Gunter Wand.