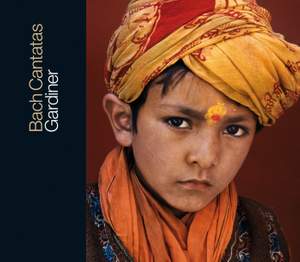 The two strongly contrasting arias [of BWV 63], both duets, are expressively sung but it is Bernarda Fink's beautifully controlled, extended recitative which stands out for its tender articulation...James... — BBC Music Magazine, Christmas 2010, 4 out of 5 stars More…

SDG174 is the much awaited last volume of the Bach Cantatas Pilgrimage, one of the most talked about musical events of the last decade.

This is an anthology of the Christmas period, combining cantatas for Christmas Day and the Epiphany.

The album opens with Christen, ätzet diesen Tag (“Christians, engrave this Day”), which was performed on Christmas Day 1999 to launch the year-long pilgrimage. This is one of Bach’s best known cantatas. The accompagnato recit was sung by Bernarda Fink to great acclaim.

Gloria in Excelsis Deo, the song of the angels at the birth of baby Jesus, is best known as the Gloria in the B Minor Mass.

Sie werden aus Saba alle kommen (“All they from Sheba shall come”) describes the procession of the three magi. Bach conveys the majesty of the scene by using high horns, and the recorders and oboes da caccia create an Eastern-like atmosphere.

The cantatas on this album display a great variety of dramatic expression. Both Mein Liebster Jesus ist verloren (“My dearest Jesus is lost”) and Liebster Jesu, mein Verlangen (”Beloved Jesus, my Desire“) tell the same story, but in a different style, expressing different emotions.

SDG174 is packaged with a separate index sheet of the Cantata series.

“One of the most ambitious musical projects of all time” Gramophone

The two strongly contrasting arias [of BWV 63], both duets, are expressively sung but it is Bernarda Fink's beautifully controlled, extended recitative which stands out for its tender articulation...James Gilchrist makes a fine contribution...notably in the solo tenor cantata 'Ich armer Mensch'

Bernarda Fink brings a moving sense of wonder to her accompanied recitative. From time to time, you feel that the performers are flying by the seat of their pants, but the commitment and enjoyment shine through.

There are countless highlights in the final two volumes. The duet-singing in BWV32 between Claron McFadden and Peter Harvey is memorably rewarding. Similarly cathartic is the peerless, reassuring expression of eternal union in the great duet of BWV154 with Michael Chance and James Gilchrist.

The variety of these works for Christmas and Epiphany is astonishing, and the singing, from the Monteverdi Choir and soloists including Magdalena Kozena, fully matches it.

The Independent on Sunday 31st October 2010

With 10 top-flight soloists, it brings this awe-inspiring project to a powerful end.