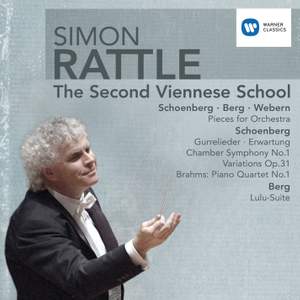 Berg: Violin Concerto 'To the memory of an angel': Conclusion

Arnold Schönberg (he adopted the spelling Schoenberg when he took American citizenship in 1941having fled Germany in 1933) was born in Vienna. Neither his Hungarian father nor Prague-born mother were musical but he, together with his sister and brother, showed talent and indeed his brother became a professional singer.

He started violin lessons at 8 and soon began to compose and making arrangements of any music that came his way. His childhood was difficult as money was short, but it became much harder on the death of his father as he had to leave school and take a job as a bank clerk for five years, and it was only the evenings when he could continue his interests in music, literature and philosophy. As he was too poor to attend concerts he and his friends played their own and would then eavesdrop on bands playing in cafés. He joined a group of string players who were conducted by Alexander von Zemlinsky and, in due time, married his sister.

There were exceptions but usually his music met with hostile audiences and, by and large, the reaction of modern audiences is the same. This is a great sadness as it not only deprives them hearing some glorious music but also limits their ability to understand the development of music from late romanticism to the twentieth century.

Take the longest of the works in the collection, Gurrelieder, Schönberg began it when he was 27 having written merely songs and chamber music. The tragic tale of the love of King Waldemar and Tove who is killed by his jealous Queen is expressed in a series of ravishingly sensual solos for the lovers, the Wood-dove then sings of her grief at Tove’s death. Waldemar, in his anguish, curses God and is sentenced to ride his horse every night for all eternity. Those who like the music of Wagner and Strauss will immediately fall under its spell. The orchestra employed is enormous, with a large chorus and six solo voices it means that performances are rare events so any chance to hear it in concert should be taken or merely enjoy it in the privacy of your own home. Schönberg increasingly felt compelled to search for a new style of expressing his musical ideas and his remaining works in the collection show how he used the orchestra in communicating it. He was also a fine orchestrator as can be appreciated in his transformation of Brahms: Piano Quartet No. 1 in G minor.

His two pupils were both born in Vienna, Anton Webern on 3rd December 1883 and Alban Berg on 9th February 1885. Webern who had learnt the piano and cello during his childhood and attended the Bayreuth Festival in 1902 met Schönberg in 1904. He, like his teacher, had written some unrepentantly romantic music but it was he who adopted his teacher’s new system and took it to its fullest extent. If the chosen series of notes (tone-row, all 12 notes in the scale played once) in its normal, inversion, retrograde and retrograde inversion yielded music of a mere 28 seconds duration then he considered the piece complete. His music has thus been described by some as “cerebral” but others, like Stravinsky, were fully convinced that here was the new way to compose and even to follow the system in their own works. Stravinsky even assisted in ensuring that the vast majority of Webern’s music was recorded. Webern withdrew from public life during the Nazi period and WW2 but on 15th September 1945 he was killed in error by an American soldier.

Berg, although he had had little musical education, wrote many songs before he met Schönberg in 1904. As his father had died when he was 15 Berg looked on his teacher, who was then 30, as his surrogate-father, mentor and guide. Unlike Webern, however, whilst he used Schönberg’s system he adapted it so that he could bring much more lyrical expression to his music – it is not atonal as there are distinct key-centres to sections.

This may clearly be seen in the Symphonic Suite from his opera “Lulu” and his last completed work the Violin Concerto. Although prompted by the death of Manon Gropius, Alma Mahler’s daughter, at the age of 18 in April 1935, and he quotes Bach’s chorale Es ist genug, it can be also considered as Berg’s own Requiem for he suffered a painful abscess in his back in August and died of general septicaemia on 24th December, aged just 50.