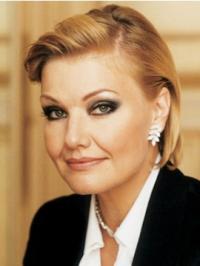 Born in Finland in 1960 and educated at the Sibelius Academy in Helsinki and in London, Karita Mattila shot to international prominence aged 23 when she won the first-ever Cardiff Singer of the World Competition with a programme which included arias from Weber’s Der Freischütz and Mozart’s Don Giovanni. She made her Royal Opera House two years later as Fiordiligi in Così fan tutte, and by the early 2000s was in international demand for roles including Eva in Die Meistersinger, Beethoven’s Leonore (both available on DVD in performances from the Metropolitan Opera), Strauss’s Salome and Ariadne, Elisabetta in Verdi’s Don Carlos (recorded under Antonio Pappano for Warner Classics), and Janáček’s Jenůfa. More recently, she has had great success in the role of the Kostelnička in the same opera, and in other mezzo and zwischenfach roles such as Madame de Croissy in Poulenc’s Dialogues de Carmelites and the Foreign Princess in Dvořák’s Rusalka.