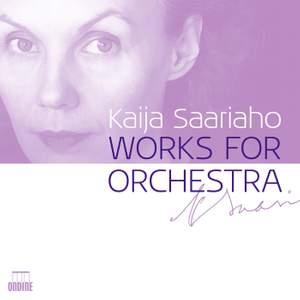 Saariaho: Oltra mar (Across the Sea)

No. 4. Si la mort pouvait attendre (If Death Could Wait)

On the occasion of her 60th anniversary in 2012, this 4-CD collector’s box contains recordings of fourteen orchestral works by Grammy-awarded Kaija Saariaho, many of them featuring vocal or instrumental soloists.

This specially priced anthology highlights the Finnish composer’s oeuvre from 1986 to 2007, a period that follows the evolution of her compositional style from the early days of her career to more recent times.

The featured works have helped to cement Saariaho’s international position as one of the most successful living composers and have garnered her several important awards along the way (Grawemeyer Award 2003, Musical America’s Composer of the Year 2008, MIDEM Classical Award 2009, Wihuri Sibelius Prize 2009, Sonning Music Prize 2011). Kaija Saariaho has been New York Carnegie Hall’s Composer-in-Residence since the beginning of the current 2011–12 Season.

The recordings have been previously released by Ondine to international popular and critical acclaim.